Who Pays The Tariffs?

I had some very interesting discussions on social media last night on who is paying for the U.S.-China Trade War.   It was kind of shocking that many didn’t even understand the basic tenets of economics yet have strong convictions held strongly.   Not good in the trading business.

It reminded me of my days teaching frosh economics at the university and encountering the 18-year old ignoramuses who thought they were the second coming of Adam Smith, JMK, and Milton Friedman.  I must now confess, I had a bias to grade these geniuses on a more onerous curve.

One of the first principles of economics is to distinguish the difference between accounting versus economic costs.  I would challenge my students at the start of the new semester with the following three questions;  1)  how much does it cost you to go to the beach (we lived in a coastal city)? 2)  should Tiger Woods mow his own lawn? or 3) should Lebron and Kobie go to college?   Thanks to Greg Mankiw for the last two.

Few understood or could grasp the concept of opportunity costs.  Some did but I tried to make sure all did by the end of the course.

Before going any further, let’s go back to Econ 101 and brush up on the differences between the two,

Accounting costs account only for the explicit costs incurred in conducting a business and not the implicit costs. The explicit costs include the direct costs to the company, such as employee wages, utility bills (water, electricity, etc.), raw material cost, premises cost, transportation and storage costs, etc. Since these are expenses for which bills or receipts are available, such costs can be objectively verified. In fact, accountants only account for accounting costs in the financial statement of the company. Since these expenses are already incurred, accounting costs are backward looking.

Economic costs, on the other hand, account for both explicit and implicit costs. Implicit costs is the opportunity cost in terms of revenue lost by forgoing the next best alternative, say renting out premises instead of conducting the business there. Implicit costs do not appear on the financial statements and are not objectively verifiable, since there can be a number of alternative to any given course of action. Implicit costs are forward looking, since they include the what if (say, we rented out the premises for next year instead of using it to conduct the business) scenario.  – eNotes

There is zero debate on who initially pays the accounting costs of a newly imposed tariff.  It is the importing entity, usually a private business or contractor.    Whether the cost of the tariff is passed on to the consumer of the final product depends on how sensitive demand is to prices changes, or what economists call the price elasticity of demand.  Otherwise, businesses will have to eat the added cost of the tariff,  adversely affecting profit margins.

Depending on if the import that is tariffed can be easily substituted, such as a commodity as soybeans,  the importer will divert purchases to other producers.   This has clearly been the case with the soybean market.

Here is some background on the trade war and soybean market,

On March 1, 2018 the U.S. announced it would impose a 25% tariff on imported steel and 10% tariff on imported aluminum .  This tariff announcement launched a series of responses from U.S. trading partners that are still on-going.  In the three weeks following the March 1st announcement, corn and soybeans prices began to plummet.

On March 22nd, the U.S. announced new tariffs on approximately $50 billion worth of Chinese goods in an effort to rebalance our trade relationship and address intellectual property.  The following day China outlined their plans to impose tariffs on $3 to $5 billion of U.S. products including pork, recycled aluminum, steel pipe, fruit, wine, and tree nuts.

On April 2nd, China implemented the tariffs associated with the March 23rd proposal, hitting $3 billion worth of U.S. imports with tariffs.  The following day the U.S. released list of approximately 1,300 targeted products for tariffs totaling $50 billion worth of Chinese goods, continuing to act in response to alleged intellectual property theft.

On April 4th, China published a list of 106 products which they say will receive a 25% import tariff–mainly automotive products and agriculture commodities including soybeans, corn, ethanol, sorghum, and beef, among others. – FarmDocDaily 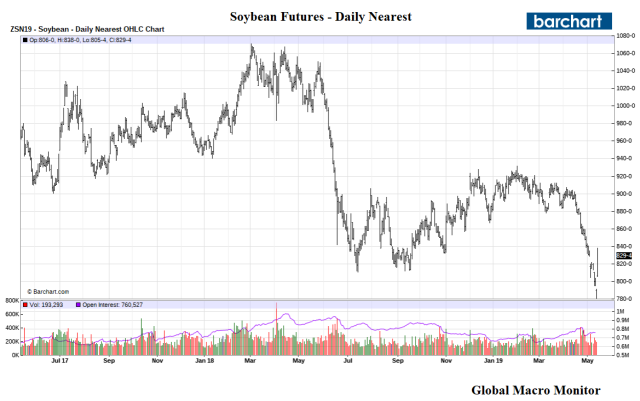 The Chinese are fortunate in that much of what they import are commodities and easily substituted.  Their retaliatory tariffs are thus hitting the American producers harder than Chinese businesses and consumers in terms of economic costs.   The government has also been fairly strategic in targeting the tariffs that hit President Trump’s base and the Republican red states.

The following charts from Bloomberg, courtesy of @M_McDonough. illustrates how Chinese soybean imports have been easily substituted with Brazilian soybeans.

We seriously doubt Chinese pigs can taste the differences between and have little preference for American beans over Brazilian beans. 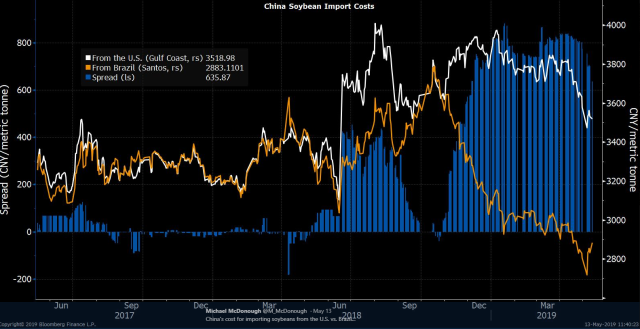 Importers pay 100 percent of the accounting costs of trade tariffs, which are, in most cases passed on to the consumer.  The economic costs of tariffs are a bit more difficult to unpack.

The exporter may eventually lower its price to offset a potential loss of market share but the fact remains the importer pays 100 percent of the tariff.  Punto!

Depending on the commoditization of the tariffed good, the importer can substitute producers easing the pain on the local domestic market, such as what is currently happening as Brazil is taking Chinese market share from U.S. soybean farmers

Even if tariffs are lifted on American soybean imports in China, the market may not, or take years, to fully recover due to a hysteresis effect,

In economics, hysteresis refers to an event in the economy that persists into the future, even after the factors that led to that event have been removed. Unemployment rate and international trade are two areas that are mostly used to explain the hysteresis effect.  — Investopedia

We have been very critical of the administration’s trade policy as it lacks a strategy;  is steeped in economic ignorance and a dangerous nationalization;  goes it alone without our allies, who are on board with many of our beefs with China,  and is too dependent on the blunt use of tariffs, which is and going to continue to wreak havoc on American farmers, producers, and consumers, and will eventually take a major toll on the global economy.

It may or may not work out but we sense it will be an opportunity lost and end as Trump’s other trade deals have,  little gain with lots of pain.   Way too much drama for such a marginal gain.

IP Theft Is Ubiquitous In Business

Finally,  we are not excusing it, but intellectual property (IP) theft is ubiquitous in the business world.   Go no further than Steve Jobs accusing Bill Gates of stealing the MacInstosh software to produce Windows in the mid-1980s, which led to decades-long litigation; or Larry Ellison accusing Google of stealing Oracle’s code for the Android operating system.

The difference in China, it is state sponsored.

We have a great personal story, some inside baseball, on the Jobs-Gates fight, which we shall share later in the week.

8 Responses to Who Pays The Tariffs?