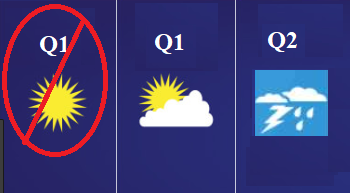 Today’s ugly retail sales and industrial production data knocked 50 bps off the Atlanta Fed’s GDP Now forecast for Q2 GDP, now down to 1.1 percent.   That’s a big decline compared to the recent Q1 3.2 percent print, which was deceptively strong as more than 65 percent of the growth was the combination of a big inventory build, an increase in government spending, and a decline in imports.

The move lower in the GDP Now Q2 forecast was exactly as we expected.  Don’t say you were not warned.

In our Monday post,  How Strong Is The U.S. Economy?,  we answered the rhetorical question with the following,

Not as strong as many, including President Trump believes.

Trade and The Fed

President Trump backpedaled on his hostile trade rhetoric today as sources say that he will delay the Saturday deadline of slapping tariffs on European and Japanese auto imports by six months.   Though this won’t cause the uncertainty to go away, the stock market made a nice reversal as the news hit the tape.

If you listened to Steve Bannon’s CNBC interview this morning, however, Trump is going full scorched earth in the China trade talks.

We totally disagree and Trump will eventually be forced to cave and make concessions.  Moreover,  Old Ohio and Old Pennsylvania ain’t coming back.

Steve’s a smart guy, but our advice is that he reads up on some  Graham Allison, the Harvard professor,

…as China challenges America’s predominance, misunderstandings about each other’s actions and intentions could lead them into a deadly trap first identified by the ancient Greek historian Thucydides. As he explained, “It was the rise of Athens and the fear that this instilled in Sparta that made war inevitable.” The past 500 years have seen 16 cases in which a rising power threatened to displace a ruling one. Twelve of these ended in war.  – Foreign Policy,  June 2017

America’s economic problems are much more complex and will not be solved by Bannon’s simple solution of confronting China and bringing back all those old “jobs that were stolen.”  To be fair, this is probably too simple a summation of his views.

Nevertheless,  we came across this data yesterday, which sums up almost all we believe ails our economy and society.   We will let you interpret the data for yourself.

Shame on those who exploit this type of ignorance rather than promoting policies to address it and to help those develop the necessary skills to survive and thrive in the Fourth Industrial Revolution.   You know exactly who they are.

As economic growth forecasts approach zero, which we believe they inevitably will and are only a few more bad data prints away,  it’s only a matter of time before the recession talk grows louder and louder.

No worries, however,  the market socialists will lean heavily on the Fed again to cut interest rates and/or take more extraordinary measures to bail out and keep the stock market afloat.  Wash, rinse, repeat.

It’s getting old, isn’t it?

How about learning some Python and SQL so we can really compete with the Chinese and Russians,

Whoever becomes the leader in this sphere [A.I.] will become the ruler of the world – Vladimir Putin

This entry was posted in Economics, Uncategorized and tagged GDP growth. Bookmark the permalink.

1 Response to The Economy Heads South