Last month we noted the divergence of nonfarm payrolls (NFP) and the employment data illustrated in the updated table below, which drove our skepticism about the labor market and overall strength of the economy at the same time many were breaking out the pom-poms.

Last Friday’s payroll data blew out expectations with a monthly gain of 263 new jobs yet employment fell again by 103k, the third decline over the past four months.  This is the first time in our database, which begins in 1990, that a positive monthly payroll number had an opposite sign of the employment data in three of four consecutive months.

That should make all of us sit up and listen.  – GMM, May 7th

We're killing it on the economy! 🔥 pic.twitter.com/hme0eihP9c 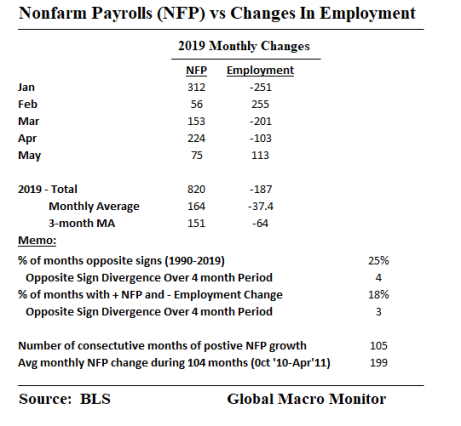 May Report – Two of Past Four Months < 100K Jobs Created

Fast forward one month, the BLS reported a big miss on Friday in nonfarm payrolls, including downward revisions of prior months. The employment data and NFP are beginning to move together again, at least for the month, however.

Digging deeper into Friday’s data we found that the 3-month moving average of the change in nonfarm payrolls is now in its lower quintile, 17th percentile, since October 2010, when the streak of 105-consecutive months of positive NFP prints began. Moreover, NFP has come in less than 100K in two of the past four months.   That has not happened since the summer of 2012, which ushered in QE3 the following fall.

…Growth in employment has been slow, and the unemployment rate remains elevated.

To support a stronger economic recovery and to help ensure that inflation, over time, is at the rate most consistent with its dual mandate, the Committee agreed today to increase policy accommodation by purchasing additional agency mortgage-backed securities at a pace of $40 billion per month…These actions, which together will increase the Committee’s holdings of longer-term securities by about $85 billion each month through the end of the year, should put downward pressure on longer-term interest rates, support mortgage markets, and help to make broader financial conditions more accommodative. – FOMC, September 13, 2012

I see the ghost of a dead king, folks.  Something is rotten in the state of Denmark. 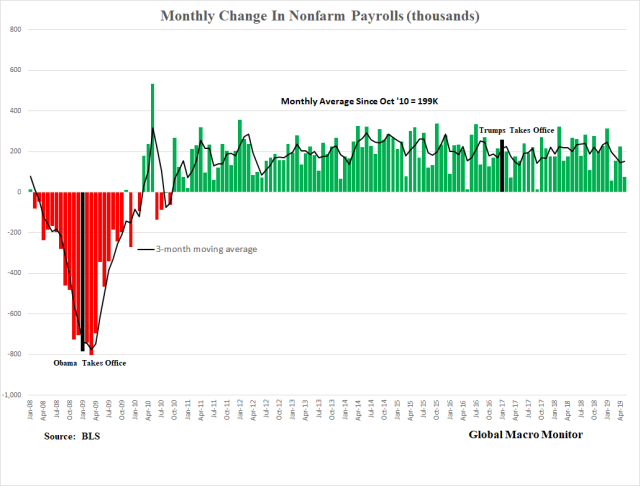 During the fall of 2012, the Chicago Fed National Financial Conditions Index was at around -0.40 compared to -0.83 today.   In addition, the valuation of the S&P500, as we measured it last week in terms of work hours needed to buy the index, is now 69 percent more expensive than it was back September 2012.

That’s not just a higher level of the S&P, folks, it is a higher macro valuation —  the index level deflated by a measure of economic activity, average hourly earnings.  In other words,  the S&P500 has outpaced the average hourly wage of producing Americans by 69 percent since the summer of 2012.  Enter the populists.

We believe markets are too focused on the level of interest rates in terms of the Fed’s potential firepower to fend off the next recession and take a bit more comfort that  policy rates are 200 bps plus above zero.   Not so fast. 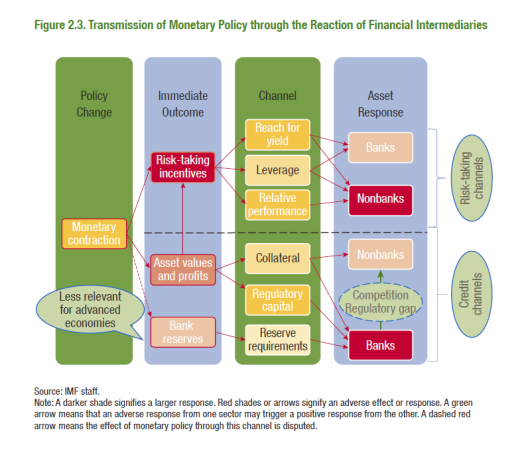 Asset inflation, not credit expansion, is now, at least as we perceive, the main transmission mechanism of monetary policy, which drives aggregate demand through the unleashing of animal spirits and the wealth effect.  If the Fed embarks on a path of monetary easing with the initial conditions of extreme asset valuations, as we have measured them, that makes us extremely nervous. 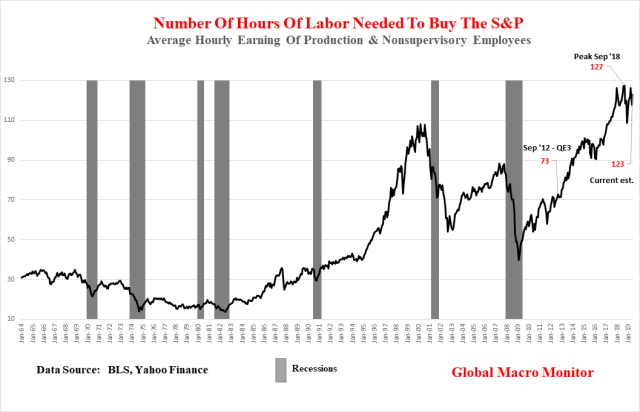 Some households in our bifurcated economy are in decent shape, not that levered, and have room to borrow to drive consumption on the margin but we suspect not that many. And those who can have a lower marginal propensity to consume than those who can’t.

This is not to say the S&P500 won’t continue to rally on monetary easing.  The market is pricing an 86 percent probability of at least two rate cuts by January 2020 and a 21 percent probability of four or more cuts and the S&P has already rallied 5.8 percent from last Monday’s low which was one nasty bear trap.

It is our view, the next easing will likely be a watershed event where markets begin to lose their already misguided overconfidence in the efficacy of central banks.  The bubble to end all bubbles.

Almost everyone is too focused on interest rates and not asset valuations as the initial conditions when a new round of monetary priming begins.

We suspect the market will start to worry and soon begin to internalize our above analysis not too far into the next round of easing and come back down to earth, slammed by a Big Dipper correction, sell-off, bear market, or whatever you wish to call it.

Do realize the Big Dipper is 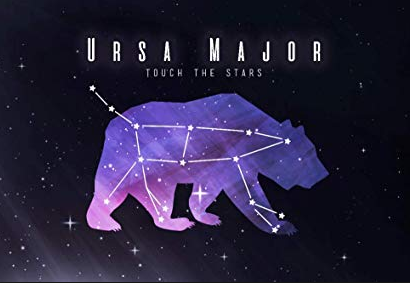 We will continue to be looking to reduce risk exposure and scanning for short opportunities as the markets lather themselves up with the coming or expected liquidity served up at the Last Chance Saloon.

As always, we reserve to right to be wrong.

Though we like being right and making money, we are often wrong and understand nobody knows the future. We analyze and write also to discipline our thoughts, stress test conventional wisdom, and help our readers to see an alternative perspective to the perma-cheerleading that dominates financial media.

Moreover, we also recognize the probabilities are rarely on the side of the bears.  Since 1921, for example, the Dow has generated a positive annual return almost 70  percent of the years.  In only 12 of those 98 years, the Dow has experienced back-to-back negative years.

Furthermore, even if all our facts are correct, our conclusions may be completely wrong.  Then there is the big problem of getting the timing right.   This is not an easy business, folks.

To illustrate this, we like to use the story that Abraham Lincoln used to tell to try and persuade juries when he was an Illinois circuit court lawyer.

“Pa, Pa, the hired man and sis are in the hay mow and she’s lifting up her skirt and he’s letting down his pants and they’re afixin’ to pee on the hay.” “Son, you got your facts absolutely right, but you’re drawing the wrong conclusion.”