Had to get this last one in before we hit the surf.

We like to look at the Cleveland Fed’s Median CPI calculation as it removes monthly outliers that can pull the averages up or down.  It hit a 10-year high in July and is pushing up close to 3 percent.

Of course, we are in deflation and U.S. bonds yields are going negative.  Doesn’t the Median CPI inflation trend confirm it? 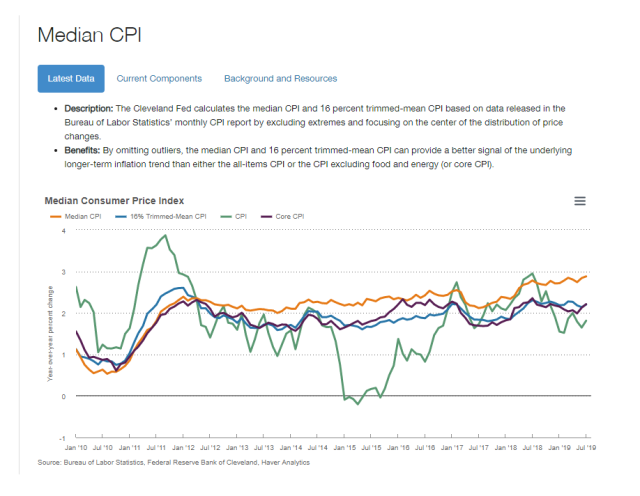 Now tell us again how many times does the Fed need to cut?   Where have they failed in meeting their dual mandate of stable prices and full employment?   Dow 50K?

So, why in the hell is the Fed not doing a reverse Operation Twist — swapping their long Treasuries in the SOMA portfolio for very short maturities  — if they are worried about and need to steepen the yield curve, which has almost zero signaling value after all the distortions caused by global QE, in our opinion.

The Fed is trying to cage and game the markets, which are acting like a dog chasing its own phantom tail that doesn’t really exist.  They are never going to win that game as markets always want mo and mo crack, and then mo crack to feed their bubbles.

It’s tantamount to herding cats or trying to harpoon seals from an aircraft carrier (whoops, not P.C.).

Tell Us Again, How Much Do You Pay Germany To Lend Them 10-year Euros?

We still hear so much nonsense during this unprecedented period of the proliferation of negative-yielding debt.  Noise, such as, “investors are now paying the German government -0.61 percent per annum to lend Deutschland 10-year money.”   Complete hogwash.

First,  Germany doesn’t issue 10-year bunds and, like stocks traded in the secondary market, the original issuers do not receive the proceeds when their securities are purchased by traders from other traders or investors.  Germany has issued a few bunds with zero interest rates or coupons over the past few years, however. 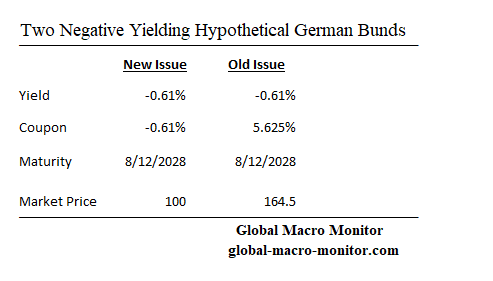 The bunds are most likely being bought up at big premiums to par by momentum or duration jockeys hoping to sell at even higher prices to the ECB when it starts a new round of QE.  The level of bund yields provides zero information but their movement, or first derivative, does seem to signal weaker expected growth and that more QE is coming.   The momo crowd better be right and the ECB better be there to take them out.

The above table reflects two hypothetical Augie ’28 German bunds trading at the current -0.61 percent yield-to-maturity.   One trades at par with a -0.61 percent coupon (doesn’t exist) and the other with a 5.625 percent coupon trading at a huge premium of 164.5.  A 5.625 coupon April 2028 bund does exist, by the way, and may or may not trade, or could be locked up in the ECB/Bundesbank portfolio.  The bund must not be callable.

The trader that buys the old issue at the current price of 164.5, for example, is betting bund yields move to -2.0 percent when the ECB announces a new round of QE, which would take the price up around 20 points.  It’s nothing more than the “greater fool theory” writ large aided and abetted by the central banks.

That passes the duck test in our book.

A $15 trillion negative-yielding giant duck  bond bubble!  That is some really, really scary shit when you think about it.

Negative yields on global government debt reveal a distorted market rather than the strength of a country’s economic profile, credit rating agency Fitch has warned.

Around $15 trillion of government-issued global debt now trades with negative yields, according to figures released by Deutsche Bank last week. The trend reflects the popularity of such types of bond as investors hunt for safer assets to park cash.  –  CNBC, August 13th

When I look at the trend of median CPI in the chart above, my knees begin to shake.

Second, we still are struggling to find any fixed-income debt instruments where the yearly cash flow is being paid to the borrower by the lender.  Even Denmark’s third-largest bank, Jyske Bank’s 10-year -0.5% interest rate mortgage includes the amortization of principal, which generates a cash flow back to the lending bank.

No folks, you are not getting paid by taking out a mortgage from Jsyke Bank, and I am almost certain the Danish bankers make up the negative rate with fees and other miscellaneous charges.  I doubt we will ever see an interest-only negative rate mortgage. Nice low monthly mortgage nuts, however, if you have no student debt and can qualify.

Even the French Treasury with its 10-year OATs trading at -0.32 percent still issue bonds with decent coupons but at large premiums to par in order to drive the yield-to-maturities down to the current secondary market pricing. 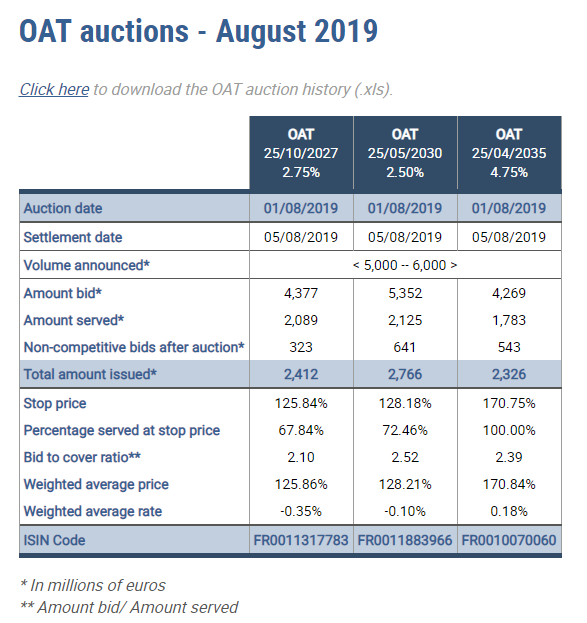 Note, if you bought French OATs in the latest auctions, the government is still paying you an annual coupon payment but holding it to maturity is a big fat loser.   You snooze, you lose.  It’s a hot potato and radioactive. It slowly leaks air the longer you hold it.  The markets, complicit with the official sector, have effectively converted long-term sovereign risk-free bonds into short-term trading instruments.

Why hold it then for more than a flip or a trade?   Governments are issuing toxic trading instruments.

Totally irresponsible, in our opinion.

When Secretary of Treasury Hank Paulsen briefed President Bush on the financial crisis shortly after Lehman failed in 2008, #43 pondered out loud, “how did we get here?”

It was Sept. 18. Lehman Brothers had just gone belly-up, overwhelmed by toxic mortgages. Bank of America had swallowed Merrill Lynch in a hastily arranged sale. Two days earlier, Mr. Bush had agreed to pump $85 billion into the failing insurance giant American International Group. The president listened as Ben S. Bernanke, chairman of the Federal Reserve, laid out the latest terrifying news: The credit markets, gripped by panic, had frozen overnight, and banks were refusing to lend money. Then his Treasury secretary, Henry M. Paulson Jr., told him that to stave off disaster, he would have to sign off on the biggest government bailout in history. Mr. Bush, according to several people in the room, paused for a single, stunned moment to take it all in. “How,” he wondered aloud, “did we get here?”  — dagblog

Starting to get that sense again.  Everyone thinks they are smart enough to get out before everyone else and very few seem to understand why and how we got here.

Our trading motto is to always panic before everyone else.

When this global bond bubble pops it will be…wait for it… one fricking doozy.

We have our doubts that the U.S. Treasury can issue trillions upon trillions of new debt at these fake and repressed low rates and we’re watching the increasingly sloppy bond and note auctions very carefully.

Run don’t walk to our latest post on this issue here.

Now it’s time for Big Wednesday.   See you next month, we hope!