Once again, seeing lots of articles and talking heads mocking bubbles and the bears, which is usually a sign a big bubble is going to burst.  The last time we saw this kind of taunting of the bears was three days before the bear market, which we think is on, began in January 2018.

Here’s what we wrote,

Finally, you also see the investing public openly mocking the bears during the later stages of a bull market. We see a lot of that these days. Just check your twitter feed.  –  GMM, January 23, 2018

Nobody really knows for certain what is causing the stress in the money markets, but our calculated guess is it is:  1)  somehow related to the massive new issuance of Treasuries, which is sucking liquidity out of the markets, as prices are repressed and not allowed to clear –>  think,  a) rent control, where the excesses have to be cleared through quantities,  and  b) Le Chatelier’s principle, where, in a dynamic equilibrium, pressure on one variable has to be offset by movement in other variables;   2) primary dealers stuffed with Treasuries having to fund themselves, and 3) though there are still $1.4 trillion of excess reserves in the banking system, it is possible only a few banks hold the bulk and are hoarders.  In other words, another top-heavy distribution problem, along with wealth and income, where the few own the much.

Whatever the case, the markets are so distorted now and becoming more so, especially by the false belief that central banks can even now fine-tune a Stradivarius violin.  Haha!

We believe quantitative easing and the massive expansion of central bank balance sheets are the financial equivalent to excessive carbon emissions resulting in kind of a of global warming in the markets. Thus, traders and investors should expect more extreme   market conditions.

Didn’t you see this coming? 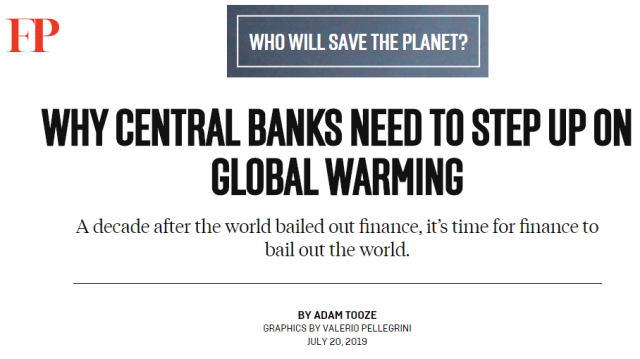 To be fair to Adam,  we took the headline a bit out of context to make our point.  Please read his article here.

During my days on Wall Street, it was stunning to watch how many would sell their souls and anything else to help them make their year-end bonus.  I specifically remember a sales pitch by some bozo about how the Mexican Peso was going to become the next dollar, less than 12 months before it fricking blew!   We laughed him out of the office.

This is one reason why Mr. Market is so cold-blooded,  doesn’t correctly discount risk, and tends to have a one in every 10,000-year event (high sigma crash) almost every 10 years.

So, folks, when listening to the Street, bubble vision, the market talking heads, and even central bankers and policymakers,  take heed the words of the great American author,  Upton Sinclair.