At least, that is our view.

We have worried out loud how global interest rate repression may cause ugly bond auctions. A problem that similarly arises in the rent-controlled housing market.

…we are watching the Treasury auctions closely and suspect they could get sloppy and ugly down at these yields.

With repressed yields a sort of “rent control” problem arises, where there is a shortage of funds at the given fake or below market yield.   Just as the case with a shortage of housing when rents are held below their market rates.

This is just a thought and first cut and needs to be further fleshed out.  — GMM, August 6th

I spoke with a friend the other day, an academic economic historian, who will no doubt win the Nobel Prize one day.  He said never before in history has the sovereign debt markets behaved as they are today, i.e.,  the ubiquity of negative-yielding debt.

Because the world is headed for the worst deflationary bust in human civilization?

We don’t think so.  The central banks have been clear they will not let that happen.  Inflation will be the end game as the central banks will provide ATMs to consumers on every street corner to tap their Universal Basic Income (UBI) accounts if they have to.  They have signaled nothing less.   Modern Monetary Theory (MMT) will provide the intellectual and political cover.

Since almost all yield curves of the DMs are inverted, we suspect its a ginormous duration momentum trade aided by a QE induced technical and structural shortage of risk-free fixed income instruments (central banks, including the Fed, own almost 50 percent of the U.S. market coupon curve).  All wrapped in the narrative of the coming global recession.

As the momentum-driven algos with no context drive more and more long bonds across the Rubicon into negative-yield land, mainly in Europe and Japan,  the sheeple do follow by front running an expected new round of QE, believing they can sell the negative-yielding bonds to the ECB at almost any yield.  No more zero bound on long-duration bonds.

Why not -2 percent on the bund?  Why not -5 percent?  The ECB bid will be there to take out the buyers, no? 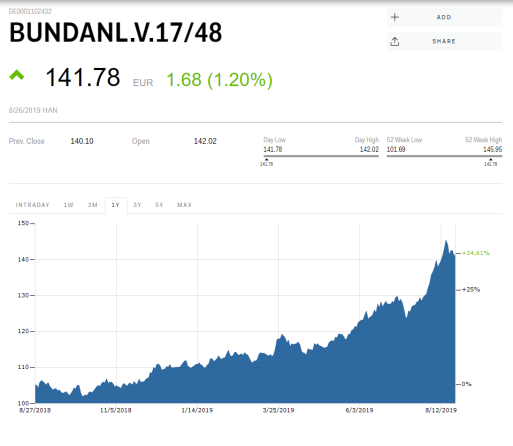 The 30-year Geman bund is up over an astounding 35 percent in the past 12 months.  Why buy Amazon stock when you get 30 percent-plus in risk-free German bonds?   Move out about 70 years and 700 kilometers south-east into the Austrian century bond and the returns are even more impressive or unbelievable,

Nothing illustrates the desperate hunt for yield among high-quality global issues better than Austria’s 100-year bond. The debt was issued at just below “par” (the nominal value of 100 used when first issuing bonds) in 2017, but in the two years subsequently it has more than doubled in worth to 210. That’s an annualized return of nearly 50%. The price has risen 30% since June alone, when Austria reopened the bond to new buyers.  – Bloomberg, Aug 18th

Wow!  A 30 percent price return since June in a low-coupon sovereign bond with massive interest rate risk!  Has somebody communicated to the buyers the ECB will be there with a 225 bid in the next round of QE?   Otherwise, that doesn’t appear to be risk-averse behavior to us and looks like one of the biggest bubbles we have ever seen, and we have seen many. 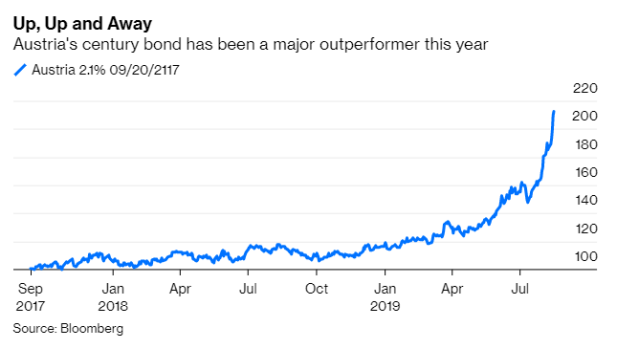 We don’t know the market microstructure but our instincts lead us to believe it’s time to start thinking about getting shorty the Austrian century bond.

We doubt,  if Europe is serious in implementing fiscal stimulus and committing to significant deficit spending, and the U.S. keeps up with its massive new issuance, the current fake interest rates will allow for smooth sovereign bond auctions going forward, which should cause some to fail and/or get very sloppy, such as today’s 7-year U.S. Treasury auction.

Yields will have to rise to clear the market or a new round of QE will have to commence in earnest to monetize the deficits (see chart below), which will tip what has been an attempt by central banks to generate demand-pull inflation into monetary inflation.   Fiat currencies are a confidence game, after all, is said and done and printed.

We could be wrong but that is our view of the end game, folks.  A strong conviction held loosely.

How and how long it takes to play out is anyone’s guess.

This is not fuzzy math, folks.

Why would anyone in their right mind hold a negative-yielding long-duration bond in their portfolio, which is so radioactive it decays returns the longer you hold them?   One of the unintended consequences of all the nonsense going on today is that risk-free long-term sovereign bonds, intended to be held until maturity, have been transformed into short-term radioactive hot potatoes.    That can’t be good.

We hear that pension funds or banks by law have to hold a specific allocation to risk-free fixed income and are forced to buy these radioactive hot potatoes.  Were not that familiar with the regulations but to that, we say change the laws before the mushroom clouds start rising over these sectors.

The stock market is trading like Trump is going to cave on slapping on the September 1st tariffs or remove them soon thereafter.   That is probably what the Chinese are hoping and will table first (note table defined the opposite in the U.S.) in the next round of passing the peace pipe if there is the next round.

Interesting comment from one of our friends down in Argentina.  The Banco Central De La Republica Argentina (BCRA) has no problem generating inflation.

You got a 2.1 bid to cover ratio! That’s great, here in Argentina yesterday we had to close the offering because the ratio was below 0.10. Only Public Institutions were amongst the offers. People are taking their savings out of the banks. Are you worried about deflation? Come back to Argentina, land of fine wine, fine meat and 50% inflation rates.  – Leo in B.A.