Can Treasury Issue An Additional $1 trn At These Fake Yields?

A question has been nagging us for some time.  If the current sovereign yields are repressed and fake, many of which are negative, can the borrowers issue any significant amount of new debt at these current yields?   Especially to long-term holders?

We are just thinking out loud here but our priors are that of the Big Three — U.S., Germany, and Japan — which have relatively transparent markets as opposed to China,  the U.S. is the only government that needs to issue a significant supply of debt and bonds into the market.

Germany runs a perennial budget surplus and is actually reducing the stock of bunds in circulation with the ECB now contemplating lifting its self-imposed cap of 33 percent of holdings on a single issuer to 50 percent in the event of a new round of QE.   Witness the negative 50 bps yield on the 10-year bund.   Zero new supply and anticipated central bank demand. See our Bund Dearth post here.

Japan runs a budget deficit of 3-4 percent of GDP but is a net saver and the BoJ owns almost half of the Japanese Government Bonds (JGBS).  We are less familiar with the JGBs x/ our painful memories of shorting them in the 1990s.  Need to do further research.

The current yields do not reflect fundamentals, in our opinion.  We suspect the Fed and other foreign central banks now own about 40-50  percent of all marketable Treasuries outstanding with maturities of 10-years or longer and much of the rest of current holders are duration jockeys, such as stock short-sellers to timid to be exposed to the painful and nutcracking equity short squeezes, such as today.   We seriously doubt these jockeys partake in the bond auctions.

So we are watching the Treasury auctions closely and suspect they could get sloppy and ugly down at these yields.

But there’s general agreement among analysts that the plateau in issuance can last only so long. The bipartisan deal to suspend the debt limit for two years also paves the way for a $324 billion increase in government spending over the period above existing budget caps. That’s emboldening most dealers to pencil in increases in debt sales by fiscal 2021, which starts in October 2020.

“The deficit is rising and the impetus toward higher spending is very strong,” said Stephen Stanley, chief economist at Amherst Pierpont Securities. “By the second half of next year Treasury will have to raise coupon sizes again.” – Bloomberg

With repressed yields a sort of “rent control” problem arises, where there is a shortage of funds at the given fake or below market yield.   Just as the case with a shortage of housing when rents are held below their market rates.

This is just a thought and first cut and needs to be further fleshed out. 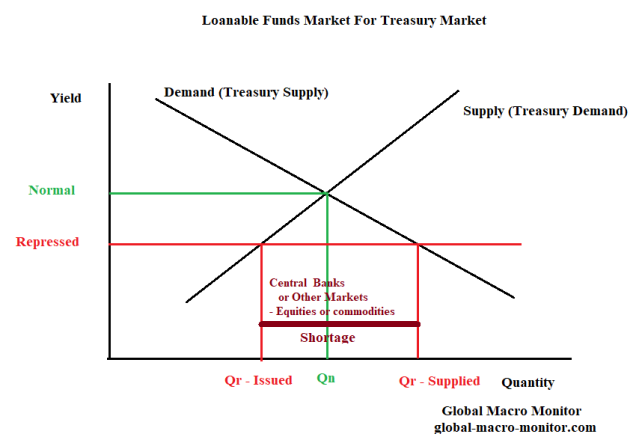 If the price of Treasury’s borrowings is repressed, the excess demand will be 1) cleared by rising rates: 2) supplied by the central bank either directly (not legal in U.S.) or indirectly through some sort of QE,  and/or 3) sucked out of other markets, such as equities or corporate bonds, in the the form of haven flows, for example, which means lower prices in those markets.

If foreigners make up the difference, up goes the dollar.  Not many good choices, no?

Are our instincts on to something?

Investors submitted bids for 2.39 times the $38 billion of three-year notes offered by the Treasury Department on Tuesday, the smallest so-called bid-to-cover ratio for that maturity in a decade. This is no anomaly. In May, the bid-to-cover ratio at a 10-year auction was also the lowest in a decade. These are far from failures, and plenty of other factors besides creditworthiness go into investors’ decisions about whether to participate in a bond auction. At the top of the list is monetary policy. But that’s the thing —  the Federal Reserve has turned dovish, suggesting an interest-rate cut could come as soon as this month. And while U.S. yields are low by historical measures, they are still higher than investors can get anywhere in the sovereign bond market in developed economies. Even so, foreign holders have cut their holdings to about 40% of the marketable U.S. debt outstanding, from more than 50% before the financial crisis. It’s hard not to come to the conclusion that demand for U.S. bonds isn’t limitless, which is a scary thought with the government on track to borrow $1 trillion to finance a budget deficit by the same amount. Expect to hear more about U.S. borrowing in coming months. Strategists expect the Treasury to exhaust its borrowing authority  in late September or early October.  – Bloomberg

Stay tuned, folks, this could be THE Black Swan.  A low probability, end of the world event on nobody’s radar.

This entry was posted in Bonds, Uncategorized and tagged Bad auctions, bonds. Bookmark the permalink.

6 Responses to Can Treasury Issue An Additional $1 trn At These Fake Yields?