This is a must view, folks.  Take 15 minutes to watch as it will be a very high return on your time investment.

Jamie is very impressive and his leadership skills shine in the short talk with Leslie Stahl. JP Mo’s private-public partnership in helping to rebuild Detroit is a blueprint for rebuilding the rustbelt, in our opinion.

But then the treasury secretary, Hank Paulson leaned on him to buy Bear Stearns.

Three days later he did it. He bought Bear Stearns for $1.2 billion.

Jamie Dimon: We thought we saved the system. You know, we thought that that would’ve been the domino that would’ve caused the whole system to go down. And it was because JPMorgan was strong that we could do it.

Lesley Stahl: Did they–

Still, it was JP Mo that almost stuffed investors with the WeWork toxic waste IPO in September.  WeWork has lost over $40 billion of value along with its CEO in the past few months.   Hey, nobody’s perfect but this is exactly why Wall Street needs regulation and watchdogs as we know from past experience unfettered capitalism can burn down more than just the house. 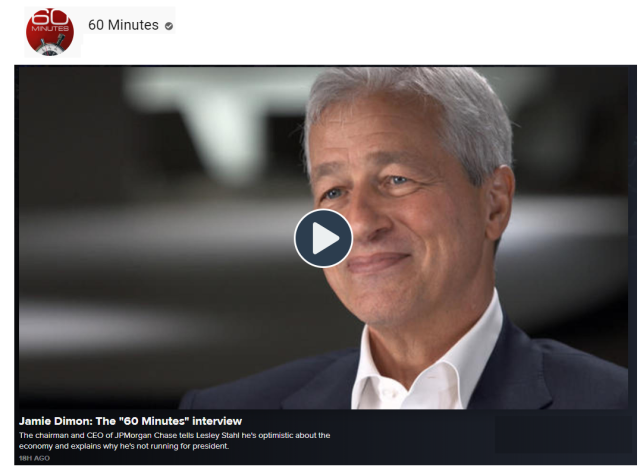 This entry was posted in Uncategorized, Video and tagged 60 Minutes, Jamie Dimon. Bookmark the permalink.

3 Responses to Jamie Dimon On 60 Minutes