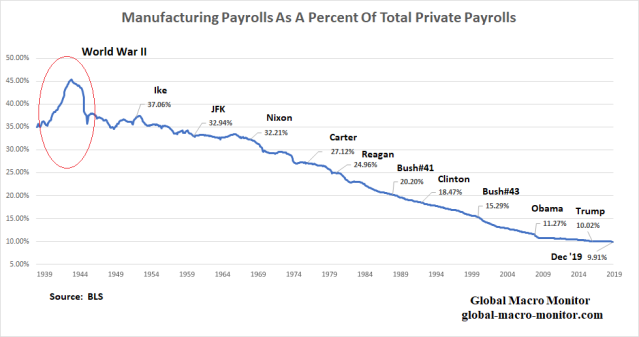 The title of the post is a bit of a misnomer.

Though the number of manufacturing jobs in the United States is 40 plus percent higher than in 1939, the proportion of total private payrolls hit its lowest level in December at 9.91 percent.

That is there are almost 4m more manufacturing payroll jobs in December 2019 than in January 1939, which at the time — just four months before Germany invaded Poland to start WWII, BTW — made up 35 percent of American nonfarm payroll jobs.  It’s relative, however, as there are also 104m more private-sector payrolls.

Manufacturing peaked as a percentage of private payrolls in the U.S. at 45.30 percent in November 1943 at the height of World War II, when everyone and their mother not in uniform were building tanks and ships. Anybody hear of, or remember Rosie The Riveter?

The absolute number of manufacturing jobs peaked at 19.6m in June 1979.  We do have our suspicions the 53 percent real increase in the value of the trade-weighted dollar from October 1978 to March 1985 inflicted a staggering and potentially fatal blow to the U.S. manufacturing sector.  Think hysteresis, folks. 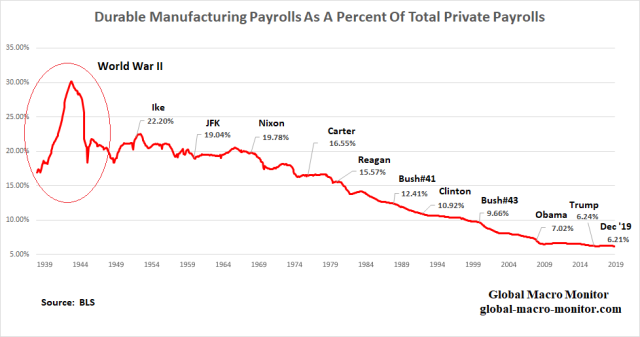 The data show that only 6.21 percent of all private-sector payrolls in December 2019 is in the durable goods manufacturing sector, also a historic low.

As the data show, the U.S. labor market has been in a secular relative decline moving away from manufacturing jobs.  Believing some minor tweaks to a few trade deals here and there will reverse the trend is Fantasyland and fairy tale thinking.   If anything, robotics and automation are going to take the proportion of manufacturing jobs down to similar levels as those in the agricultural sector, in our opinion.

The chart also clearly illustrates trade is not the only issue affecting the relative decline in manufacturing payrolls and the promised renaissance of manufacturing jobs just ain’t gonna happen.   Policymakers better prepare the public for a high-tech future or there will be more hell to pay, and then some.

The Greatest Economy Ever

President Trump was out again today pounding the table about the “greatest economy ever.”  Man, the B.S. is getting old.

We thought we would let the data speak by juxtaposing the key economic digits in his first three years in office with President Obama’s last three years.   You decide.

Note the huge headwind caused by the dollar strength in Obama’s last three years.  No doubt it had a major impact on manufacturing payrolls.   Recall our analysis from last July,  which included the following table of the correlation of manufacturing payrolls with the year-on-year change in the trade-weighted dollar.

For example, the correlation between the 3-month moving average of the monthly change in machinery payrolls and the year-on-year change in the value of the trade-weighted dollar index lagged six months, is -0.877 for the period.  That is a stunningly high number, folks, and makes all the economic sense in the world.

President Trump would have dropped the hammer and sickle big-time on the Fed if the dollar increased in value just a quarter of the move under Obama.

Wait…doesn’t POTUS hammer the Fed almost on a daily basis and saves his sickle for tariffs?

This entry was posted in Manufacturing, Uncategorized and tagged Manufacturing Employment. Bookmark the permalink.