The attraction of most of these streaming services, in my opinion, is their new content, and Amazon Prime is getting really good.

…Netflix’s latest quarterly results seem to confirm that notion, as the streaming giant added more paid subscribers over the past six months than ever before in its history. Nearly 16 million people signed up for the service in the first quarter alone, with another 10 million subscribers added by the end of June. That brings Netflix’s global paid memberships to 193 million, up 26 million since the beginning of 2020. To add some perspective, Netflix added just 12 million subscribers in the first half of 2019 and less than 28 million in the entire year.

Considering the circumstances under which the record subscriber growth was achieved, Netflix was sensible enough not to gloat about it. Instead the company struck a pensive tone in its letter to shareholders. “We live in uncertain times with restrictions on what we can do socially and many people are turning to entertainment for relaxation, connection, comfort and stimulation,” the letter reads, after the company had already acknowledged its fortunate position in a similar letter published in April. “At Netflix, we’re acutely aware that we are fortunate to have a service that is even more meaningful to people confined at home, and which we can operate remotely with minimal disruption in the short to medium term,” the company had said back then.

Looking ahead, Netflix expects subscriber growth to slow down significantly in the second half of the year, as some demand may have been moved up in response to the pandemic. The company expects to add 2.5 million subscribers by the end of September, which would mark the lowest level of growth since 2016. — Statista 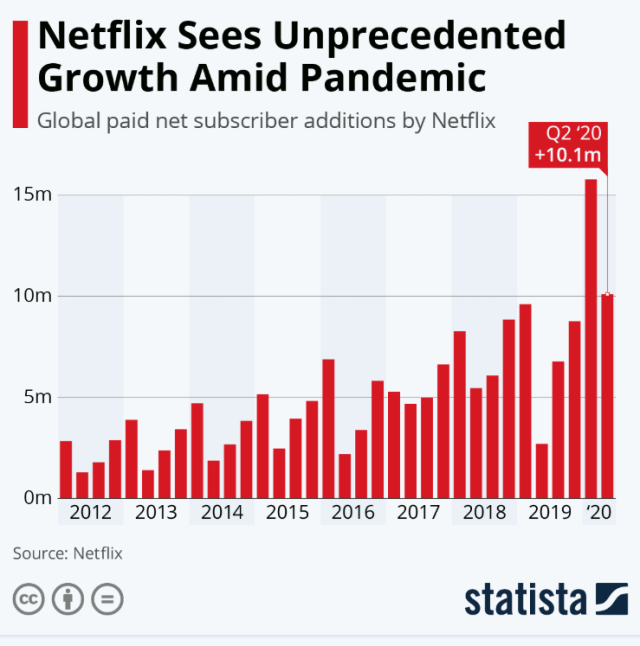 Netflix (NFLX) closed down 6.52 percent today after last night’s earnings release but was able to hold its 20-day moving average.  The stock has carved out two Doji candlesticks over the past two days, however, which is a huge red warning flag, especially after Monday’s long red candle.

Watch Netflix carefully, folks, as it is a bellwether of the bull market and was the best performing stock of the past decade, only to be recently eclipsed by Tesla, which is now up around 260 percent year-to-date. 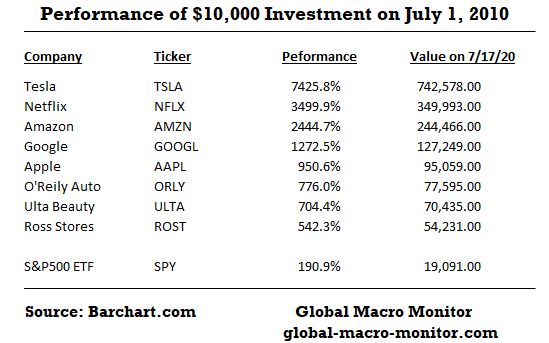 This entry was posted in Equity, Uncategorized and tagged Netflix, Stocks, Tesla. Bookmark the permalink.

1 Response to Has Netflix Peaked?