BFTP: Blast From The Past

Anthony Kim posted 11 birdies in the second round of the 2009 Masters.

Here’s some more 19th hole fodder to impress your buddies and something I bet you didn’t know about Augusta:  German POWs from nearby Camp Gordon built the bridge over Rae’s Creek next to the 13th tee box during WWII.  They were part of Rommel’s Panzer division in North Africa responsible for building bridges to enable tanks to cross rivers.

While Augusta National is famed for its almost unnaturally beautiful flora, as it turns out some rather interesting fauna once called the course home as well: 200 heads of cattle and more than 1,400 turkeys. From 1943 until late 1944, Augusta National was closed for play and transformed into a farm of sorts to help support the war effort. Some of the turkeys were given to club members during Christmas (meat rations were in effect) while the rest were sold to local residents to help fund the club. And the cows? Well, they acted as natural lawnmowers but also inflicted quite a bit of damage to Augusta National, devouring many of the course’s famed plants and shrubs.

To help repair cattle-related damage and revive Augusta National for its reopening, 42 German prisoners of war from nearby Camp Gordon were shuttled back and forth to work on the course.

Writes John Strege in “When War Played Through: Golf During World War II:”

“The POWs had been with the engineering crew serving Rommel, the Desert Fox, in North Africa, part of the Panzer division responsible for building bridges that enabled German tanks to cross rivers. It was a useful skill for the renovation work to be done at Augusta National. The Germans were asked to erect a bridge over Rae’s Creek adjacent to the tee box at the thirteenth hole.”

The Masters resumed at Augusta National — now free of German prisoners and barnyard animals — in 1946. And interestingly enough, the Supreme Commander of the Allied Forces in Europe during World War II, Dwight D. Eisenhower, later became a member of Augusta National. Two Augusta National landmarks bearing Eisenhower’s name still stand today: the Eisenhower Tree (a loblolly pine at the 17th hole that the former president and avid golfer repeatedly struck with golf balls and requested be cut down; photo above) and the Eisenhower Cabin (built in the 1950s according to Secret Service security guidelines by the club for the former president’s visits). 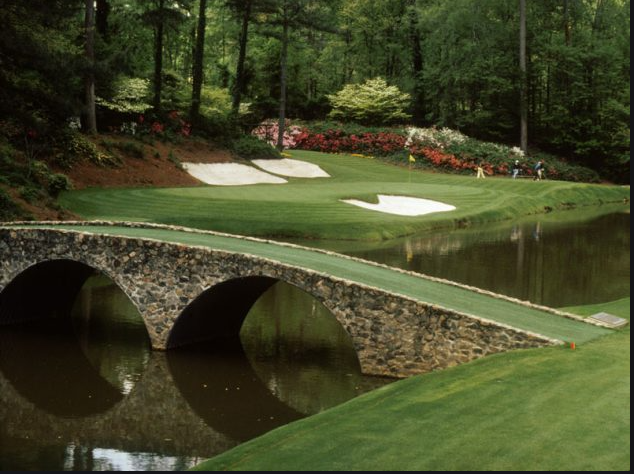