Healthcare will be the most disruptive sector in history, what’s about to happen to healthcare in the next two years in the United States. – Professor Scott Galloway, NYU Stern School of Business

Michael Smerconish‘s opening segment in last Saturday’s show is a must view, folks.

It also parrots what Carol K. has been pounding the table about and beating into me over the past year.  The COVID crisis has accelerated the trends, both good and bad, and the tech disruption party is just getting started.

Apple took 42 years to get to $1 trillion in market capitalization. It went from $1 trillion to $2 trillion in just 20 weeks. Take any trend in society and in the business sector, take it out 10 years and chances are we’re there right now. This has literally reached into the future and pulled it — pulled it forward for us, both good and bad.  — Prof. Scott Galloway

The following data is stunning – 82 percent of U.S. households are Amazon Prime Members.  That is incredible market power. 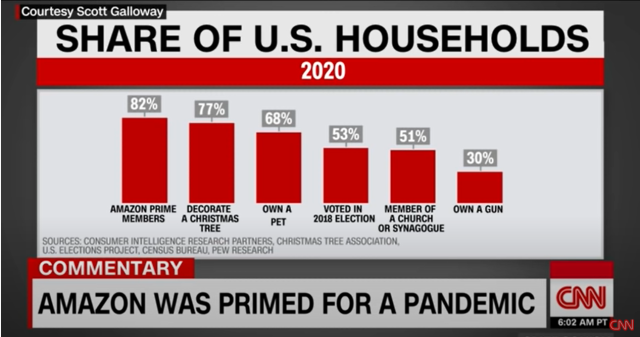 I personally think Jeff Bezos, who’s the smartest business person in the world will likely spin AWS prophylactically and my prediction, Michael, is that in the year 2025, the most valuable company in the world will be a recently spun, independent AWS.

Hope you can view the video in its entirety but if pressed for time go to 2:06 minutes in to catch Smerconish’s interview with Professor Scott Galloway of the NYU Stern School of Business.

It’s no accident Amazon just flipped on their pill pack acquisition and you can now speak to an Amazon pharmacist 24 by 7. We’re going to see, for the first time potentially, healthcare costs come tracking down or crashing down.

I think Amazon’s going to be the fastest-growing healthcare company in the world within two to three years and we’re going to see maybe the potential to get off our heels and play defense around healthcare and go onto our toes and have a level of primary care delivered in the home which potentially or ideally could lower costs and dramatically expand affordability.  – Prof. Galloway

This entry was posted in Healthcare, Technology and tagged Amazon, Scott Galloway, Smerconish. Bookmark the permalink.