Week in Review: The Power of Zero To Be Tested?

The S&P500 and Dow Jones Industrials suffered their worst weekly loss of the year, both down 2.3 percent.  The U.S. and European equity indices had bearish outside moves and all major global equity indices we track closed the week below their 50-day moving averages.   Asia fared better only due to the fact they closed before the release of Friday’s weak employment data.   Investors and traders have definitely sold in May and gone away in the S&P500, Dow Jones, and all three European equity indices, which have had negative closes for five weeks in a row.

On the positive side,  the Brazilian BOVESPA looks like it’s trying to put in a bottom and the Shanghai Composite was able to hold its January’s important closing low of 2677 after trading down to 2689 early in the week.   We will be watching Asia closely at the open on Sunday night as their equity markets have a chance to react to Friday’s employment report.

Apple, the general of this bull market, closed up 1.79 percent on the week and could be a catalyst for a market bounce if Mr. Jobs surprises at the company’s worldwide developers conference this week.   Many traders are short the stock going into the conference on the expectation nothing of significance will be announced.   Shorting Apple?  Ouch!

U.S. Treasury bonds closed stronger, but were unable to take out Wednesday’s  highs even on the dismal employment data.   The dollar closed down for the second straight week and we find it interesting that risk assets have been unable to rally on the weak dollar.   Though it’s too early to tell, keep this on your radar as the weak dollar/risk on trade may be a changin’.

The power of zero (interest rates) as a risk-on market prop may be about to face its first serious test.   The toxic brew, which would signal something more serious than a garden variety correction, would be the combination of a weaker dollar,  equity and bonds moving lower, crude oil and gold moving higher.   Not yet a high probability event, in our opinion,  and let’s hope we don’t see it, but keep it on your McSwan list.   A credible and sustainable long-term debt/fiscal program included in a Congressional debt ceiling deal would go a long way in easing the concerns of the ratings agencies and increase the confidence of foreign investors in their dollar holdings.   Further dithering will be costly. 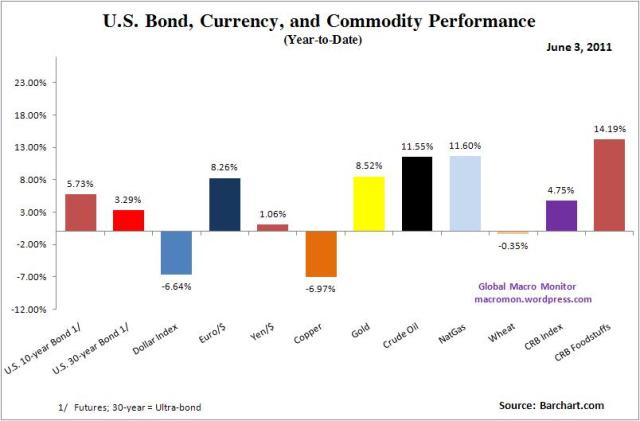 2 Responses to Week in Review: The Power of Zero To Be Tested?