The stock, alone, has created $150 billion of wealth since early October, which is almost 1 percent of U.S. GDP.   The market cap has become so large that if AAPL is repriced to a multiple that we think its deserves, the economy and markets are going to look much different than they do today.    Think about the “wealth effect”  a repriced Apple will have just on the allocation and rebalancing of portfolios.

We can’t recall, however, seeing an RSI of 95 — short-term severely overbought — in this stock and are hoping for some sideways action to consolidate the gains before moving on up.    You know our view, however,  the global central banks have set the stage for another massive asset bubble and they are probably going to get it, in our opinion.

The story is in place — the wireless revolution.  Valuations are not unambiguously extreme,  or, at least,  still ambiguous, and many, if not most,  are still not in the game.   Furthermore, the macro swans that spoiled last year’s party have either drowned in central bank liquidity or temporarily flown the coop (as in China hard landing).   “Temporarily” is a perception that keeps the wall of worry in place and also makes for some dangerous trading in parabolic moves. 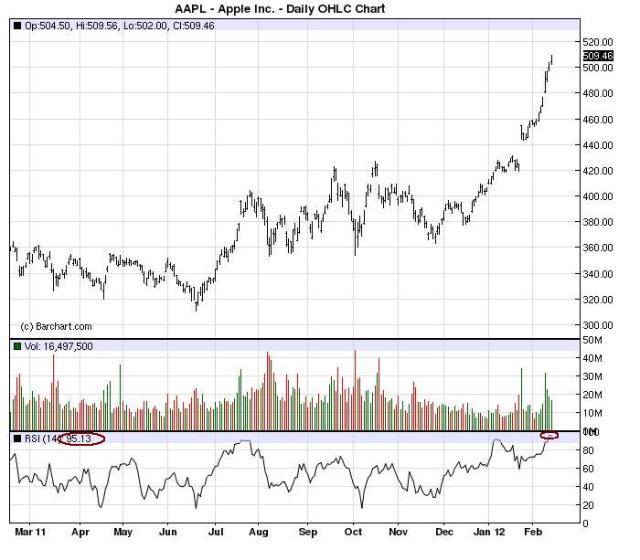 This entry was posted in Apple, Equities and tagged Apple, Parabolic, Stock Bubble. Bookmark the permalink.