Does Apple Need to Fill the Gap?

Apple is down almost $10 (1.63%) today,  which is a surprise given the overall market is up.   After making an all-time high at $621.45 on Wednesday (note the Doji candlestick) the stock has traded down, most likely on profit taking into quarter end.

We were in the local Apple store last Friday and were surprised by the lack of enthusiasm over the new iPad.   Also we noted a couple of customers asking for financing on their new purchases, which Apple does provide — no interest on for 6 months on purchases under $999 and 12 months for over purchases $999.   All anecdotal, but interesting, nonetheless.

Given the stock’s parabolic move — almost 50 percent in Q1 –, that almost all the good news should be priced, and the lack of bears on the stock,  we think it is not out of the question the stock moves down to fill the March 14th opening gap at $568-578.

We are and have been one Apple’s biggest fans and are huge bulls on this stock, but still think it just needs to consolidate some before repricing higher.  We could be wrong and they might come for this stock at the beginning of the quarter.  But more consolidation and gap fills before earnings next month would be a healthy thing, in our opinion. 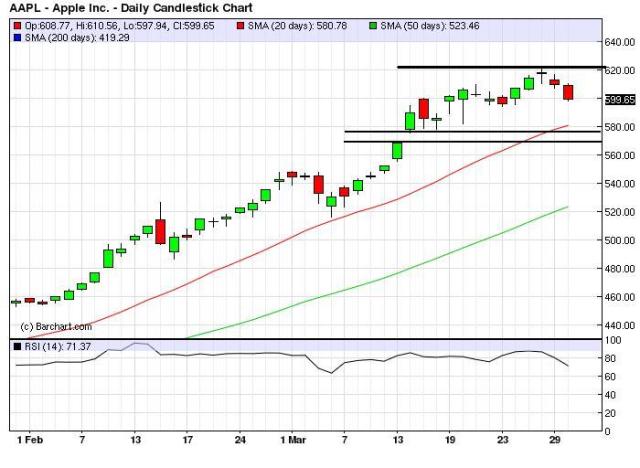 (click here if chart and video are not observable)

This entry was posted in Apple and tagged Apple, Gap fill. Bookmark the permalink.