It’s very difficult for us to explain, on the fundamental basis,  why the market has been so bid over the past few days after Monday’s ugly reversal.

Could this be it?

New numbers from the swing state of Iowa show a toss-up with Romney picking up 47% of the vote to Obama’s 46%. In that state, Romney has a 10-point advantage on the question of who is trusted more to deal with the economy.

The race is also a toss-up in Ohio, Virginia, Florida and Colorado. Romney leads in North Carolina and Missouri. Obama leads in Pennsylvania. New numbers from Wisconsin will be released at noon Eastern today.

Four years ago, after wrapping up the Democratic nomination, Obama led John McCain every single day during the month of June. His average lead was five percentage points.  Obama eventually won by seven points. In the first 13 days of June for Election 2012, Romney has held the lead 10 times, the candidates have been tied twice, and Obama has been on top once. See tracking history. 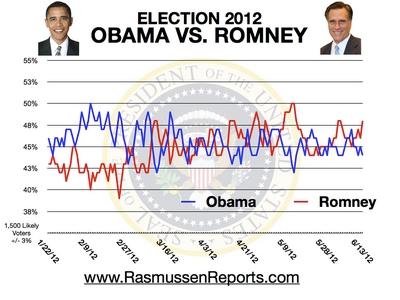 The tracking data is almost as volatile as stock prices and Intrade still has the President’s chances of winning in November at 52.7 percent,  but down almost 10 points in the last month.

Not a political statement, just as an observation and an opinion that risk markets rally on a Romney victory.

2 Responses to Sniffing The Romney Rally?