Is This Why Gold and Bonds Sold Off?

Truly a mug’s game to try and retrofit fundamentals to short-term market moves, but ain’t gonna stop us!

We’ve noted the comovement of the U.S. 10-year T-Note with gold over the past few months, driven, we believe, mainly by geopolitical worries.

Once again today,  bond down, gold down.   We thought the correlation began with a short squeeze in the bond then morphed into worries about global political stability.

Could today’s action be the result of President Trump finally reaching out to  China?   And what really keeps up us at night has been tethered back a bit?

Call me, maybe? Trump reaches out to China’s president in a letter.
.
BEIJING — The letter wishing China a “prosperous Year of the Rooster” came 11 days after China celebrated its Lunar New Year’s festival. President Trump has yet to speak to President Xi Jinping since his inauguration, even though he has met or spoken directly with at least 18 other world leaders.

But he is now in contact, and promising a “constructive relationship” between the world’s two most powerful nations.

Man,  look at that tracker! 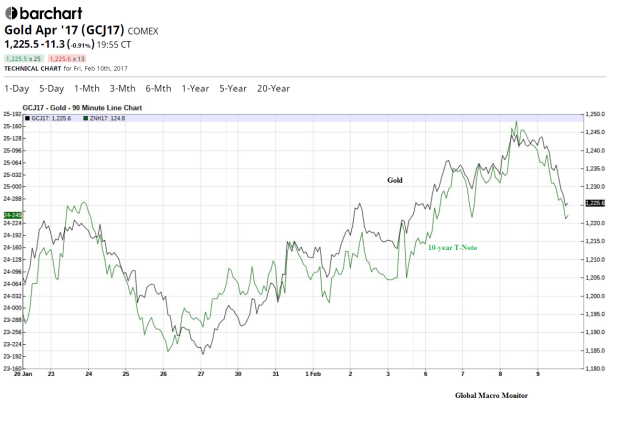 Let’s see if there is follow through to confirm our thesis.

Shorted some gold equities as the GDX is already up over 20 percent for the year.   Always with a stop.

1 Response to Is This Why Gold and Bonds Sold Off?