The Dollar Index was spanked today after what the market percieved as a dovish FOMC statement.    Kind of odd as early inflation indicators starting to pick up.

In fact, the non-commercials haven’t been this long the euro/dollar since 2011, just a few months before the Eurozone almost melted down.

Watch 91.919, the May 2016 low, which is about 1.6 percent lower.  If that breaks, the weekly and monthly chart show little support until the 80 level.   Ouch!  That will get Super Mario’s attention and we doubt he will allow it to get there.   We think a 1.18 euro/dollar is pretty close to his threshold of pain and it’s currently just about there.

Also, note,  at the beginning of the year the dollar was overvalued, to the extreme,  on a purchasing power parity basis across almost every currency in the world.

We know how President Trump feels about weak currencies that contribute to bilateral U.S. trade deficits .

It is a weighted geometric mean of the dollar’s value relative to other select currencies: 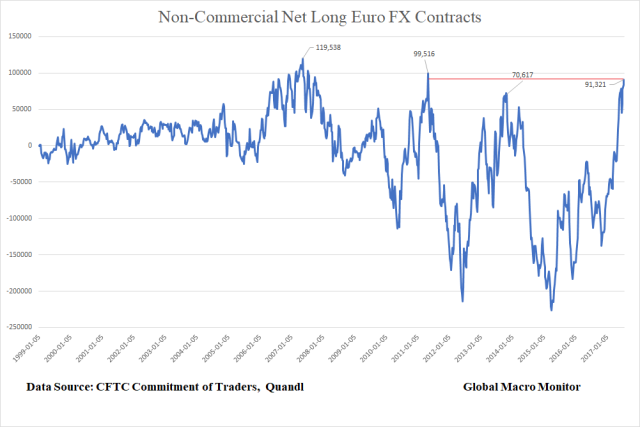 This entry was posted in Dollar, Uncategorized and tagged Dollar Index, Euro, FOMC. Bookmark the permalink.