Just when you thought eMac – Emmual Macron –  had stamped out right-wing populism in Europe, here come the Germans.   The country’s two leading political parties,  the Christian Democrats (CDU/CSU – “The Union) and the Social Democrats (SPD),  who are were the governing coalition took a beating in today’s election. 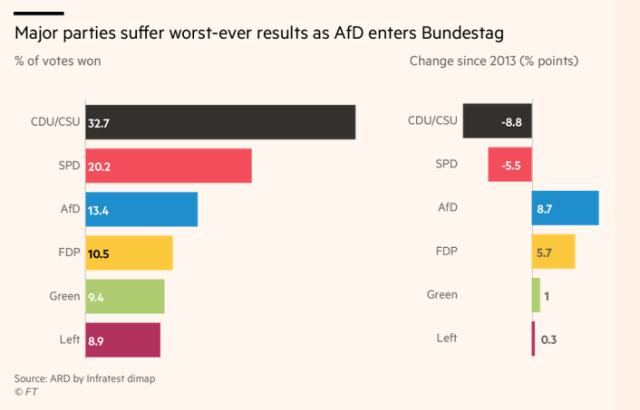 The CDU,  Chancellor Angela Merkel’s party,  and its sister party, the CSU,  lost almost 9 percent of the votes won relative to 2013 and the the SPD lost 5.5 percent.

The Social Democrats have already stated they will move to the opposition and Ms. Merkel will have to cobble together, for the first time a three-party coalition government,  most likely consisting of the Christian Democrats (CDU, CSU), the Free Democratic Party (FDP), and the Greens.

The new government will be more unstable, and it will create more market uncertainty.

Furthermore,  the jubilant Alternative for Germany (AfD), who campaigned to “take their country back”  (sound familiar?) will be the third largest party and will (Deutsche)mark the first time a hard right populist party is represented in the Bundestag.   Just as they are in other countries, some say this is the final normalization of German politics.

Nevertheless,  in a post tonight on Spiegel Online, Stefan Kuzmany comment on the election and the AfD,

…the AfD is no ordinary party. Its ranks, even its leadership, include people who openly court far-right positions, who want to take a positive view of the German military’s actions in World War II, who play down the Holocaust and want to abolish the remembrance of it. And now those people will soon be sitting in the German parliament, the Bundestag. –  Spiegel Online

The right-wing populists have already announced their intention to “chase down” Ms. Merkel every day.

To counter the AfD,  the Chancellor Merkel may have to tact to the right, especially on immigration, but this may cause instability within her new fragile coalition.

Will the Greens demand the current German Finance Minister, Wolfgang Schäuble, step down?  Will the stance on the ECB’s QE policy harden?  Will FDP remain skeptical of Macron’s proposal to shore up the eurozone?

No reaction in the markets tonight with the S&P futures and the euro flattish.

On the margin,  the election results are risk market bearish and we suspect the euro some weakening in the common currency after its massive run.

But politics, generally,  are mostly noise and transitory unless they portend some major structural changes.  Populism would count as a major structure change.

More, important, however,  Europe’s economic recovery is gaining momentum.   Moreover,  Europe is in a massive bond bubble and we expect a taper tantrum sometime in the next month.    Negative rates with the current momentum is absurd.

A little over an hour to the European open.