Demographics are destiny and increasingly becoming  the defining narrative of the global economy.   Japan’s aging population is blamed for much of the country’s economic woes.   Doomsters predict economic Armageddon as the world goes gray.

We put together a nice data dump for you to decide.   We also look at the relationship between investment, the median age of a country, and the IMF’s 2017-20 GDP forecast for the world’s economies. 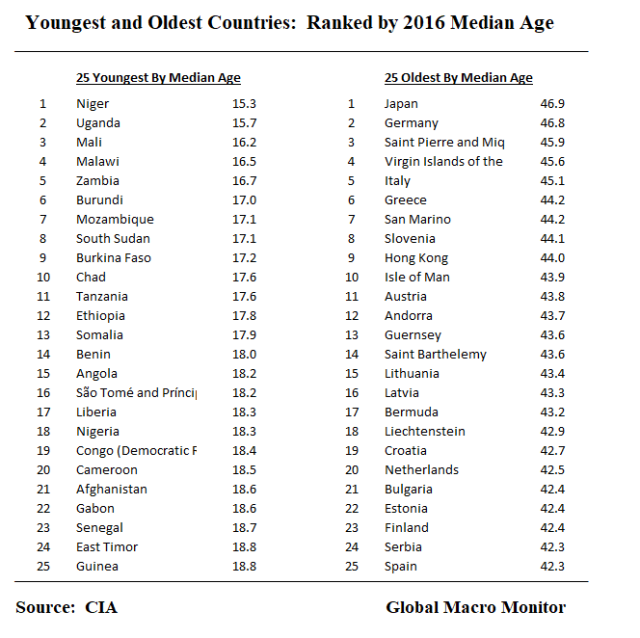 Just as major league baseball has an elite 30-30 club – where a player hits over 30 home runs and steals over 30 bases in one year – we have constructed our own  30-30 club for the global economy.     We filtered countries by median age, those under 30 years; and by investment as percent of GDP, those who averaged over 30 percent of GDP from 2014-2016.

Our 30-30 club,  in theory, should experience higher growth than other economies.  A younger population equates to a growing labor force, and higher investment should lead to higher productivity growth —  both,  the secret sauce of a dynamic economy and main factors in traditional growth models.  Human capital, or education and training,  and innovation, tougher to measure, are also additional necessary factors for dynamic economic growth.

This post is just a cursory analysis that could be the topic of many Ph.D. dissertations.  We thought about running some multiple regressions, but you do not pay us enough.

By the way,  Mike Trout was the last major league ballplayer to hit over 30 home runs and steal more than 30 bases in 2012.

Let us first have a look at the G20 data for a reference point to compare the later data.

The G20 median age is almost eight years older than the world’s median age.  The EU is old.   Japan and Germany are the two oldest countries in the world.

Blasé!  Except for the outliers, especially India and Indonesia. 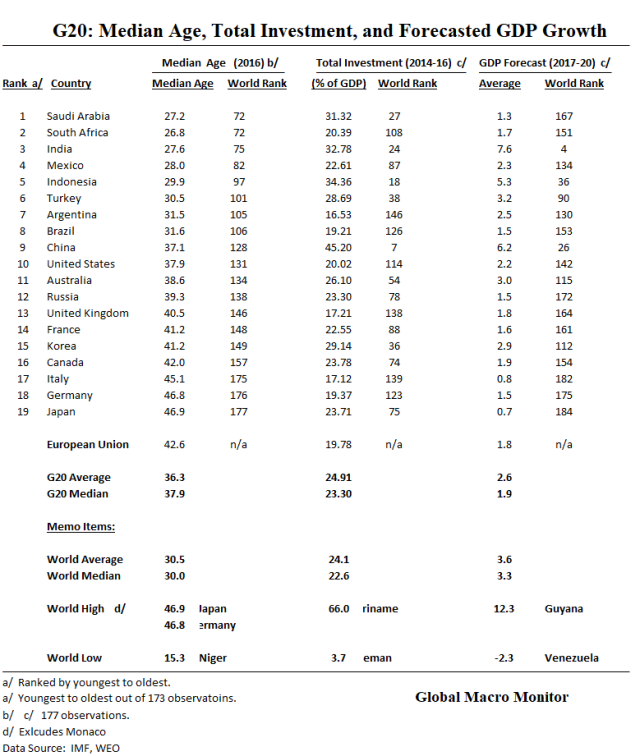 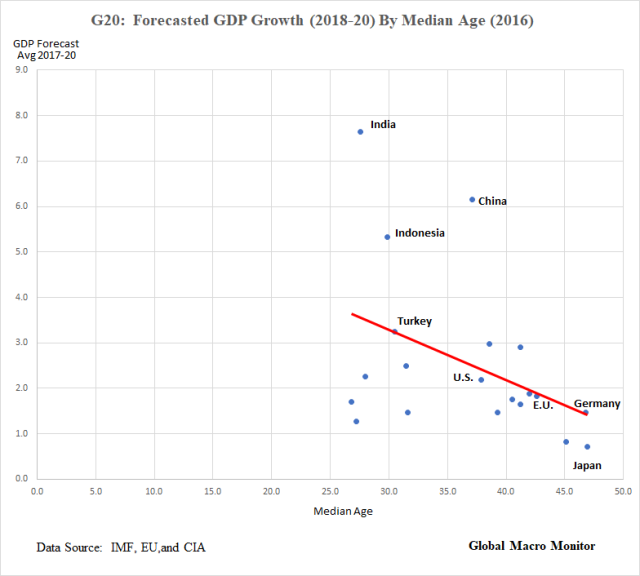 The chart shows the relationship between GDP growth and median age.   The trend line illustrates that older populations tend to grow slower than younger ones.

Yep.  It is a simplistic analysis,  other variables should be controlled for, and a better analysis would include multiple multi-variate regressions.      Grab your blockchain and send us some Bitcoin if you want us to go deeper.

It is no surprise that relatively small emerging markets dominate the 30-30 club except for India, Indonesia, and Saudi.    Very similar to the fact growth in the equity markets is found in the small cap stocks. 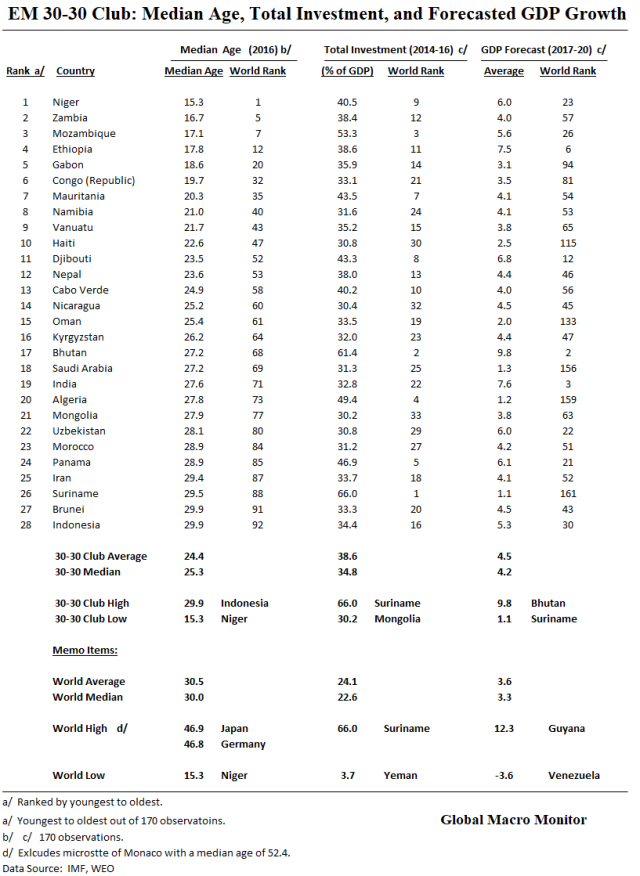 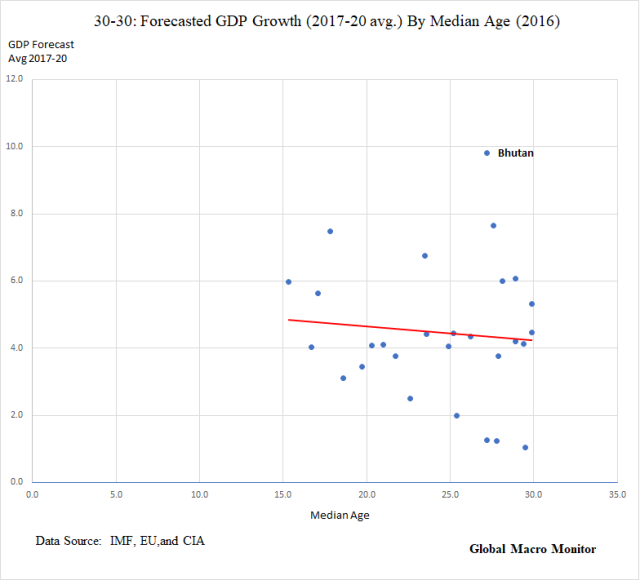 The chart is interesting in that as the median age approaches 30 the deviation from the trend line gets larger.  We have to think about that for awhile.

Nevertheless,  not a tight fit but still the sign is correct – a negative relationship.  Younger countries,  even in our 30-30 club,  tend to grow faster than older countries.

We threw in the chart of the entire sample.  As expected the relationship is much tighter.

Moreover, the converse is true with the world chart:  as the median age increases country GDP growth converges at lower levels.    Younger economies have a much more broader dispersion of economic performance. 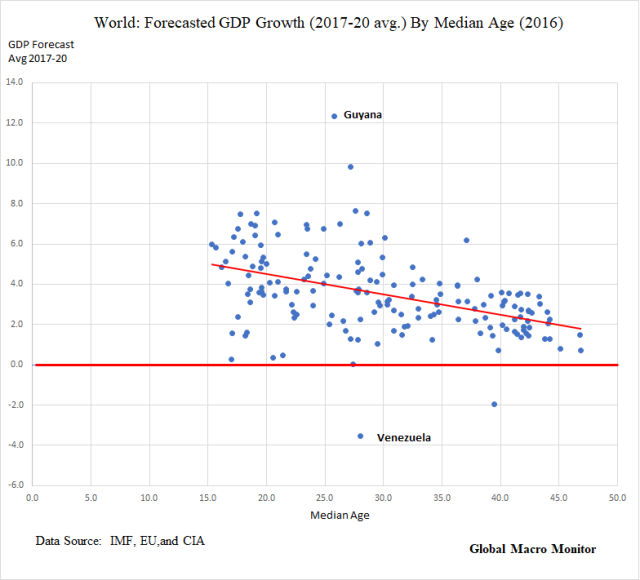 Need to nomalize valuations first,  however.

1 Response to The Emerging Markets 30-30 Club