Bouncing around.  Doesn’t seem like many real sellers out there.  Traders and ‘bots push the indices down and then have to cover into the close.  We wrote about this in our Week In Review post this past Sunday.

Risks are building in the markets but so is bearishness.   Though markets are going to do what they are going to do in short-term, we have learned there are still not a lot of natural sellers, and if the market gets too offside,  you can bet the other side for a trade.

The fast money is now so short-term focused, especially the growing number of HFTs that don’t hold overnight risk, they have no patience and must cover quickly especially if the market begins to move against them.   We do believe investors are going to get a chance to buy stocks and much lower levels, however. – GMM, March 4 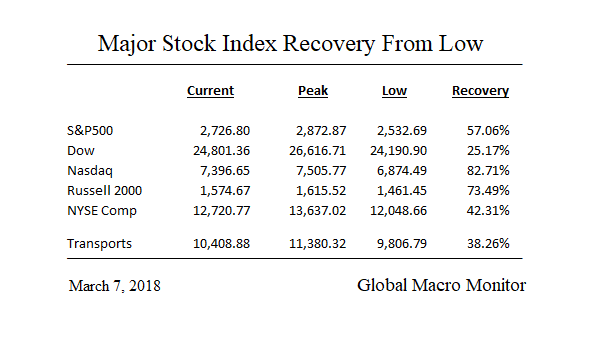 The market rallied back from the Gary Cohn sell-off to finish slightly lower on the news that President Trump is softening up his tough trade talk.  The White House indeed speaks hardly, and carries a small stick.   Full of bluster and fake thunder,  markets just are not buying it anymore.

Press secretary Sarah Huckabee Sanders told reporters the exemptions would be made on a “case by case” and “country by country” basis, a reversal from the policy articulated by the White House just days ago that there would be no exemptions from Trump’s plan.  – U.S. News

Not surprised as we speculated yesterday but we are with the Paper Tiger on this one.  Unfortunately, his reputation as a policy flake and Paper Tiger is growing and increases the risk of miscalculation by an adversary.

If leaders around the world take Trump seriously, it is because of the dangers such an unserious man with such enormous power represents. – WPR

The S&P500 found support right at the 20-day moving average and the key 50 percent Fibonacci retracement level at 2,702 before rallying about one percent into the close.

The president may reverse again and harden on tariffs as he campaigns in Pennsylvania’s 18th congressional district this weekend, which he won by 20 points 2016.  The Democratic candidate, Coner Lamb, now leads Republican, Rick Saccone.

President Trump has specifically mentioned that the special election played a role in the administration’s trade policy.   The special election is seen as a bellwether of what may be a potential lambasting of the Republicans in the November midterms.

Tariffs now take a back seat to the average hourly wage number in Friday’s employment data.