Every Little Thing They Do On Trade Is Tragic

— paraphrasing Sting’s, Every Little Thing She Does Is Magic

Man, if you are going to rob a bank, rob the fricking bank!.  Don’t do it half ass as your probability of going to prison and  FUBAR  go up exponentially.

Carving out countries exempt from the just proclaimed steel tariffs will do little to stop steel imports, in our opinion.

The reason?  A form of  trade diversion.

The steel tariff will shift trade from potentially lower cost producers, such as Korea and Brazil (a hypothetical, as we are not certain of relative prices) to Mexico and Canada, for example. 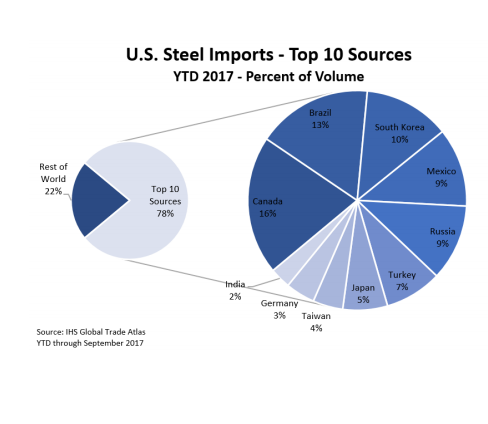 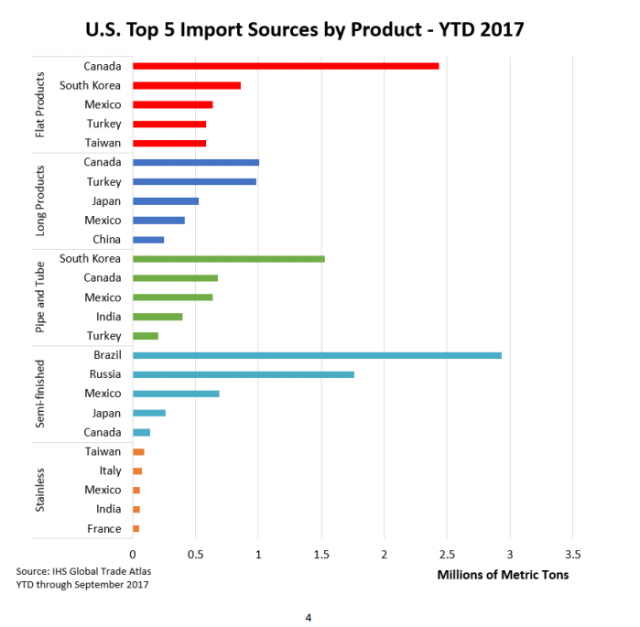 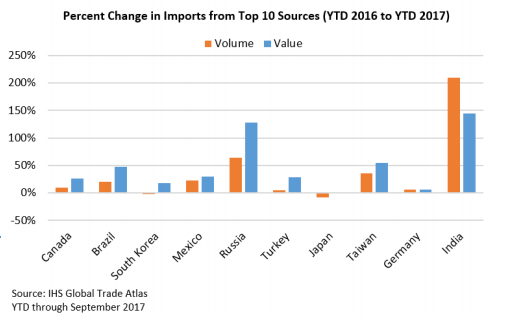 The relative price of steel imports from Korea and Brazil will go up 20 percent versus Canadian and Mexican steel.   Importers will now import more steel from Mexico and Canada and less from Brazil and Korea.   Of course, the volume may be restrained by the steel producing capacity of our good neighbors to the north and south.

Rather than importing 25 percent of our steel from Canada and Mexico the percentage likely could climb north of 50 percent.  In order to provide incentives for local producers — the raison d’être of a tariff — the relative price of steel imports must increase across the board.

Injecting the term “short-term” on exemptions into the proclamation is probably enough to refrain Mexico and Canada from immediately expanding steel capacity and preventing China from moving their steel mills to Monterrey and Ontario.

Will the tariffs create new jobs in the United States?   We suspect very little and not even close to what the president is touting.   Even if they do, the steel jobs will be more than offset by losses in other sectors subject to higher prices and retaliation.

We are not sure if the president is getting good economic advice from those surrounding him.  We even doubt they understand basic international trade theory.

Let’s see if the steel companies carry through with their announcements to reopen closed plants.  Check back with us in one year.

The administration’s individual tax cuts were also half baked.  Capping deductions for local property, income, and state taxes will have unintended consequences we have yet to discover and will be more clear on April 15, 2019.

If you are going to cut taxes, cut taxes and live with the consequences of higher debt.  Find and dandy to find offsets, but don’t further distort an already distorted tax system.

We do give President Trump big kudos on the corporate tax cut.

It is All Politics

Note, today’s announcement on tariffs was a proclamation, not even a legal document.   Only words, and we know, for certainty, with this president, words can mean whatever he wants them to, and can change day to day.

The timing of the announcement is hollow as it is political.

The special election in the Penn 18th is seen as a bellwether for the November midterms and an indicator of a potential major thumping of the Republicans.

By the way, the steel stocks have been hammered since the exemptions were announced yesterday.

U.S. Steel (X) was down around 3 percent today, and off 6.4 percent from yesterday’s intraday high, and the steel ETF (SLX) fell 2 percent today. 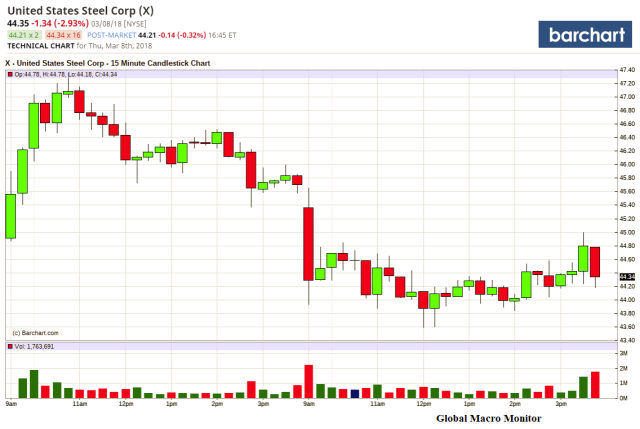 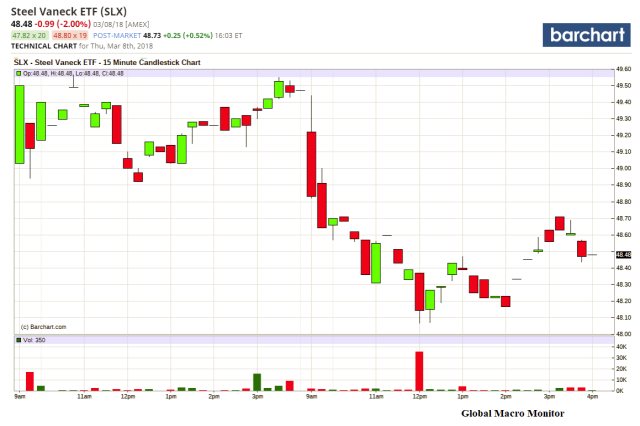 Finally,  rather than offering the steel workers false hope, motivated for political reasons, we believe the optimal policy is to compensate the losers of free trade by subsidizing their income and retraining to thrive in the 21st century economy.

Why not make sure their kids are learning to code so they can program the robots that will be making steel in the future?

In the future, the steel industry could be higher tech, with more robots and fewer workers.

Industry leaders see the steel business evolving over the coming decade. Change could come fast and it could be painful.

Here is a personal story about a time when politicians really cared for those hurt from free trade yet understood trade benefited the majority.

After finishing up my Ph.D. comprehensive exams in economics and in between the dissertation, I interviewed at the White House,  Council of Economic Advisors (CEA), as a junior economist.  They had a program where the CEA would hire graduate students for one year who were in between their comp exams and the dissertation.

Ronald Reagan was President at the time and the day long interview took place in April 1986, just a few days after the U.S. bombed Muammar Gaddafi.  That day, security on the White House grounds and in the Old Executive Office Building, where the Council is located, was intense.  Secret Service, dressed in their black garb and flack jackets, everywhere.

Beryl Sprinkel was Chairman of the CEA and Michael Mussa was the real intellectual heavy weight of the CEA.  The entire council was made up of  “Chicago Boys,” not Chileans, but academics from the University of Chicago.  Very free market thinking in everything.

Note, this was during a period in the economy when the trade sector was getting hammered by the strong dollar.  The trade weighted U.S. dollar index had increased almost 30 percent since Reagan took office and was causing real hardship in the tradable goods sector.

So, the first question I was asked at the beginning of the interview was, “there is a bill in Congress to write the steelworkers, who have been displaced and lost their jobs through trade,  a check for $100,000 [$221,000 in 2016 dollars].   What do you think of this bill?

I answered, “no, I think retraining and other polices may be more optimal”.    They replied, “that’s what the Democrats think.”   I didn’t get the job.

The Chicago boys think the individual can choose their future and retraining better than the government.

That $100,000 was real money and compensation back then, much more than what the government offers to the losers of free trade and globalization today.  And, let’s get real,  at the end of the day, it was an “effective bribe” to the steelworkers to allow the country to keep pursuing free trade policies.

The day long interview ended in Beryl Sprinkel’s office where he asked me, “[Gregor], can you make good charts?  The President likes his charts.”   Indeed, President Reagan did. 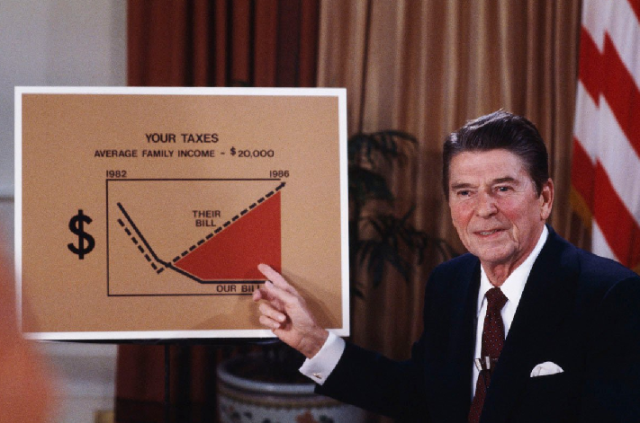 When I was leaving the Old Executive Office Building (OEOB) after the interview, I thought of taking a little tour of the White House grounds.  I walked out of the east end of OEOB onto the White House grounds, probably no less than 100 feet from the Oval Office.  I was met by a Secret Service officer in a black flack jacket carrying a high powered rifle, who asked what I was doing there.  He booted me faster than a fighter jet.    But, oh, so close to power!

Better compensation for the losers and continue to pursue free trade.  Tariffs help a small minority and hurt the majority — a Tyranny of the Minority, if you will.