Why This Correction Is Different

Those dreaded words you never want to hear as an investor, “this time is different.”

It does apply to the latest stock market correction, however.

The sell-off that began on January 29th spanned ten trading days and took the S&P500 down 10.2 percent (11.8 percent from intraday high to low), and was the first correction this century that corresponded with a rise in the 10-year Treasury yield.   That is a positive correlation between stocks and bonds to the downside during an official correction.

Moreover, the table below shows there has been only one other correction or bear market in almost 30 years that has seen the 10-year Treasury yield rise.  The correction in 1999 and 41 bps move higher in bond yields was the result of the Fed and market yields rebounding from the sharp drop and overshoot in interest rates during the Russian debt default and LTCM crisis in 1998.

Excluding 1999, a special case, in our opinion, the recent correction was the first that has experienced a simultaneous rise in bond yields since 1990.  Before February for almost 30 years,  bonds have rallied during every stock market correction as a “flight-to-quality” trade. 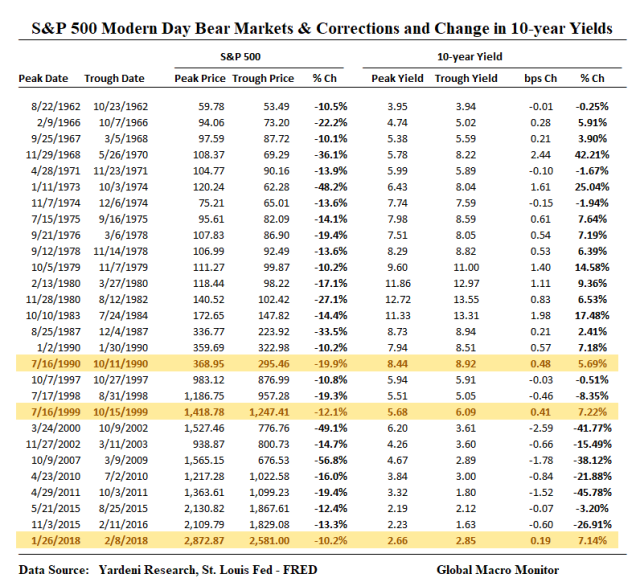 What is also remarkable about the rise in rates during the volatility spike is that it coincided with record shorts in bond and note futures.   If past is prologue,  any trader would think the fast money would run to cover their short positions as stock market volatility experienced its largest one-day spike in history.   Rates hardly budged and have traded in 15 bps range since the first day of the sell-off.

The bulls will argue the rise in rates is a positive signal.  That they reflect an economy which is picking up momentum and positive for future earnings.   We do not disagree,  but our bullishness is tempered by the large increase in the stock of debt over the past 20 years.   We believe this is the essence of what is bothering the risk markets.

After all it was not long ago that former Fed Chair, Paul Volcker,  stated that interest rates are not rising because they cannot rise.

Our current debt may be manageable at a time of unprecedentedly low interest rates. But if we let our debt grow, and interest rates normalize, the interest burden alone would choke our budget and squeeze out other essential spending.  – Paul Volcker and Pete Peterson,  Oct 2016

The following table and chart illustrate the change in debt by sector, normalized by GDP,  over the past several years.  The total debt-to-GDP ratio, as measured by the Federal Reserve Flow of Funds data  (Table D.3) currently stands at or near a record high,  2.53 times GDP, up almost 40 percent relative to GDP since the beginning of the century.

The ratio would be much higher if not for the standstill in mortgage debt by households since 2007, as household mortgage debt outstanding  on an absolute basis is below 2007 levels.   Note the massive build in mortgage debt relative to GDP from 2000-07, which was the main culprit of the credit and financial crisis.

The chart illustrates that a debt-to-GDP ratio of 2.5 seems to be some sort of a ceiling.   It could be markets will not allow it to go much higher.   Therefore as the U.S. government further increases its total debt outstanding,  crowding out may ensue restricting further increases in other types of debt.   That appears to be case with mortgage debt.

Trump Administration Not Heeding The Warning

Furthermore,  we just put the following table together, and to our surprise total U.S. public sector (central government) debt stock has increased over $1.5 trillion since the Trump administration took office even as the economy is experiencing some of its highest growth in a decade.

This is only $500 billion lower than the first 400 days of the Obama administration’s increase in the public debt, which took place during a deep recession borderline depression.

If debt expansion cannot be arrested during periods of increased growth, when will it? This, even before considering phase 2 of the tax cuts and the infrastructure deal.

Again, this is the major underlying worry that is nagging global markets as interest rates creep higher, in our opinion.

The current overall technical position of the stock of Treasury securities remains favorable, as the Fed and foreign central banks still control more than half of outstanding marketable notes and bond.    The flow is deteriorating rapidly, however.

The U.S. government financing needs are increasing rapidly, which will result in greater supply in the form of new issuance.   On the demand side,  the Fed is a now a net seller and its supply will also have to absorbed by the price sensitive market.

The equity market should continue to struggle to make new highs during this period of monetary contraction.  The funding of the U.S. budget deficits is now more dependent on market forces and is more price sensitive as opposed to the rate insensitive policy dependence, the dynamics which drove the funding of the government over the past ten years.

Granted,  the BoJ and ECB are still injecting liquidity into the global markets,  the hawks will soon be coming from Germany to the ECB, however, and the markets should begin to discount this later in the year.

Who knows what the BoJ will do, but if any country on earth can’t afford higher interest rates, it is Japan.  There is no way out and room for rising rates in the land of the rising sun.   Unless, of course,  they move into full monetization or a BoJ debt jubilee.

Thank goodness the U.S. is in a period of Orwellian Monetary Policy,  where monetary tightening is,  in reality,  an easing as the Fed injects liquidity into the system in the form of paying higher interest rates on excess reserves.   Otherwise, liquidity conditions would be growing much tighter.

Interest On Excess Reserves (IOER)
Because of the extremely large amount of excess reserves in the banking system – the liability side of balance sheet expansion —  the Fed no longer uses traditional monetary policy.  The long-standing monetary policy tool prior to the crisis was draining and adding bank reserves through open market operations to control liquidity, the Fed Funds interest rate, and bank credit.

Now, the Fed uses a new tool — interest on excess reserves (IOER) — to tighten monetary policy and raise interest rates.  That is rather than draining it adds liquidity to the financial system in the form of interest payments to the banking system.  – Global Macro Monitor,  May 2017

When Excess Debt Becomes Your Governor

The large stock of global debt in a rising interest rate environment is going to act as governor on both the equity markets and global economic growth.   That was the signal and how we are reading February’s simultaneous rise in bond yields and massive volatility shock.

The U.S. government’s huge and growing budget deficits have become gargantuan enough to threaten the great American growth machine. And Trump’s policies to date—a combination of deep tax cuts and sharp spending increases—are shortening the fuse on that fiscal time bomb, by dramatically widening the already unsustainable gap between revenues and outlays. On our current course, we’re headed for a morass of punitive taxes, puny growth, and stagnant incomes for workers—a future that’s the precise opposite of what Trump champions…

…as the debt load grows, efforts by the Federal Reserve to stimulate the economy with lower rates would be more likely to feed runaway inflation. “Then, investors will dump Treasuries,” says John Cochrane, an economist at the Hoover Institution. “That will drive rates far higher, and make the budget picture even worse.”  – Fortune, March 15

Time to temper thy short and medium-term bullishness, and be patient for lower prices.

This entry was posted in Bonds, Equities, Fed, Uncategorized. Bookmark the permalink.

30 Responses to Why This Correction Is Different