Mr. October And Me

We’re not talking about October stock market corrections but the World Series!   The Boston Red Sox and Los Angeles Dodgers square off tonight to begin the 114th October Classic.

The last time the two teams met was in 1916 when the Dodgers were test driving a new nickname, the “Robins.”   The Red Sox beat Brooklyn four games to one.  Casey Stengel starred for the Robins, and Babe Ruth pitched thirteen shutout innings after giving up a run in the first inning to win the fourteen-inning game two.  The winning players share (World Series bonus) was $3,910 ($87,500 in 2018 dollars) versus the last year’s Astros’ player share of  $438,901.

No baseball player is more synonymous with the World Series than Mr. October himself, Reggie Jackson. 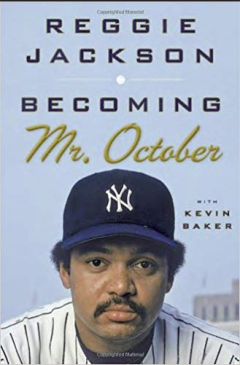 Jackson earned the nickname “Mr. October” with his performance in Game 6 of the 1977 World Series against the Los Angeles Dodgers. Down 3-2 in the fourth inning, the Yankees outfielder hit a two-run home run and did the exact same thing in the fifth inning. Then in the eighth, he hit another home run to put the Yankees up 8-3. His performance secured the win and the series for New York.
– Athlon Sports

I have truly lived a Walter Mitty life.

The first twenty-five years of my life was baseball, 24/7, an obsession that almost compares to today’s techno-addicted youth.

My baseball career ended due to an injury, but also mainly the lack of emotional maturity and the ability to pull out of an ugly hitting slump.  Nothing worse for your confidence than cruising along during the season hitting .350, then to fall into a 2-for-50 tailspin.  Then comes the vicious circle thinking you will never get another hit.  Ironically, baseball players can fail 70 percent of the time, and still hit .300, making  it to the Hall of Fame.

It’s very similar to what happens to your psyche and P&L, trying to trade crude oil and natural gas against the ‘bots.  You gotta shake off the bad ones and move on.   I could’ve been somebody, damn it!

I did have a headstart in baseball as a young teen working with the Los Angeles Dodgers, first as a batboy, then batting practice pitcher, and adjunct bullpen catcher.  Later, I would spend some time with the Atlanta Braves and Oakland A’s.

I caught Tommy John (TJ) — the real one, who had the surgery named for him – for almost the entire season he was out before his remarkable comeback.  He could barely extend his hand after the surgery but refused to give up.  I would try to hide in the outfield before games but would soon hear Red Adams, the Dodgers pitching coach, calling me to come to the bullpen.

TJ was very wild when he first started on the comeback trail, bouncing curveballs in the dirt, which too often ended up smacking me in the family jewels.  It was a painful year, and it’s  amazing that I could still have children. Tommy John is one of the greatest human beings ever.

One winter or spring during the off-season, can’t recall,  I get a call from my boss to come to Dodger Stadium for a few days as Reggie Jackson was going to film a television commercial.  He said the production company might need a pitcher or catcher and I should be around to help Reggie around the clubhouse and stadium.

I wasn’t in the union so being in the commercial was out.

Over the next three days,  Reggie and I became very close.  He treated me like I was his little brother.  Reggie had this larger than life image, with a reputation for a larger than life ego.

…it all flows from me. I’m the straw that stirs the drink – Reggie Jackson,  Sports Illustrated, May 1977

He took a lot of heat for that quote, and still denies it,  and I certainly didn’t see the Reggie ego the media often portrayed.   He was super kind, friendly, down to earth, always made time for you, and was just a great guy to hang out with.  He made you feel comfortable and not conscious you were in the presence of one of baseball’s greatest stars.  It was very much like a good day hanging with your big brother.

Self-centered egomaniacs don’t treat the little people like that.

One thing that really stood out over our three days together was how Reggie spoke.  He sounded like an university professor, very intelligent,    Later I found out he has an IQ of 160, the same as Steven Hawking!   That is genius zip code.

What really sealed the deal was when Reggie finished filming and was about to leave.  He handed me a piece of paper with an address and phone number:

He said when I was in the Bay Area; I would never stay in a hotel but with him.   I believe that house burnt down in the 1991 Oakland Hills fire.

He then asked for my shoe size and address.  We shook hands and parted ways.

About a week later five boxes of Puma tennis shoes came in the mail.  Thank you,  Reggie!

The next season,  the A’s traded Reggie to the Baltimore Orioles as a rental.  He was playing out his option and Charles Finley, the A’s owner, would never pay Reggie’s new market rate.

My little brother idolized Reggie, so when the O’s were in town, I took him to a game.  After the game,  I went down to the dugout to say hi as Reggie trotted in from the outfield.  He invited me into the clubhouse.  I asked Reg if my little brother could accompany me.  He said absolutely.

I had told Reggie about my brother, and when we get into the clubhouse, he points to his locker and says,  “Geoff, anything, take anything you want. My uniform, glove, anything.”   Big egos and the self-absorbed don’t treat little people like this.

Pete Rose was the same way, by the way.  Always thinking and caring about the little guy.

5 Responses to Mr. October And Me