Does it ever change?

We were going through some old posts this morning and came across this pearl from over eight years ago.   Charges of socialism were also polluting the political environment back then just as they are today.   Branding the other side as “socialist” is going to be the central strategy of one party in the 2020 election.

We are proud that we were way ahead of this last February.  The young are left and prefer Nordic Capitalism over  the American economic mishmash and they finally flexed their political muscle during the midterms, also as we expected.

We are trained economists and purists, so it pisses us off more than you know when we hear somebody called a socialist because of their support for Medicare, a 40-hour workweek, or, for that matter, government guaranteed bank checking and saving deposits, subsidies to build a new football stadium or support for mortgage interest tax write-offs.  The American economy is a mix of both the private and public sector.

We define socialism as government ownership of the means of production, especially its “commanding heights.”   Ironically, it does seem we are now moving toward some sort of managed international trade regime, which is about as socialist as it gets, folks.

Enough.  We may have a more in-depth post on this subject over the weekend.

Keep it on your radar.

When we wrote the following, our focus was on one thing, and one thing only –  our trading P&L.  We were whipping and driving billions back then and I think our main focus was in Apple’s stock and gold futures.

We have updated the chart, which is totally at odds with what’s currently perceived or being portrayed.  Also, note we were spot on in our prediction of the 2012 presidential election, which was kind of ballsy given Obama’s approval rating was only around 45 percent at the time and heading south, and just after his record shallacking in the 2010 midterms.

The comments are hilarious, but do have some merit. 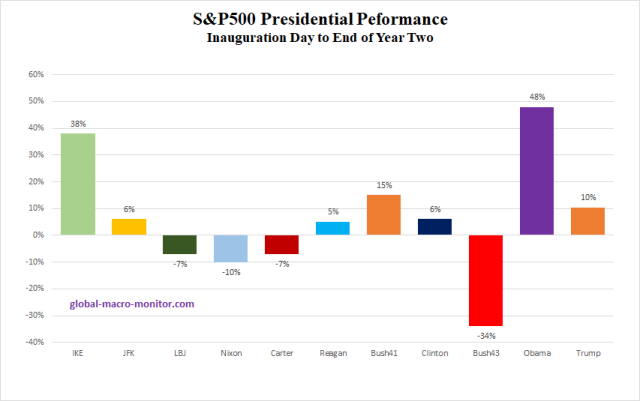 If this is Socialism, call me Comrade

No politics or partisanship here, “just the facts ma’am”.  The stock market as measured by the S&P500 is up just about 50 percent since President Obama’s inauguration to today’s close.   Only Eisenhower comes close, but not even in the same zip code.   A 50 percent stock move does a lot of “spreading the wealth around” and Joe the Plumber’s pension is in much better shape today than it was in November 2008!

Sure, sure, there are a  ton of reasons to explain the differences, but this is politics folks!    A CapEX spending led economic acceleration and pick-up in hiring in 2011, which usually follows such a strong equity performance,  will make the President look unbeatable same time next year, in our opinion.  Stay tuned.

16 Responses to If this is Socialism, call me Comrade

Wow. This post almost made me want to go back in time and restore the Soviet Union where I spent first 38 years of my life. Call yourself comrades or anything you want but don’t give me more socialism. Using stock market return as yardstick to prove that policies work and that one president is better than other is plain wrong. Can you say that Bush 41 was a better president than Clinton because stock market grew more? Was Comrade Brezhnev a good communist ruler because the quality of life did improve under his rule. And you know what, I bet the fastest economic growth the Soviet Union and Russia for that matter have ever experienced was under Comrade Stalin. Was he good? He started at a very low point and used all the wrong ideas and methods. But if we only judged by economic growth we should have said that he was the best. If we used the healthcare as measure, Comrade Castro would have been the winner. Not considering the starting point and ways the success was achieved is just wrong. For a fuller picture you should have the unemployment chart included as well.

As far as Joe the Plumber is concerned, does he even have a 401K? Even if he had one, he might have spent it because he does not have a job. But if he has the savings account he got zero and will be getting zero for a long time. He was robbed for you to enjoy the stock market gains. Here is where we need to start talking socialism. Exact same thing was happening in the Soviet Union. The actual prosperity, including big Swiss bank accounts, was only among the party elite, their families and close friends.

This entry was posted in Equities, Politics, Uncategorized and tagged Call Me Comrade, Presidential Peformance, S&P500, Socialism. Bookmark the permalink.