Nice piece in ZH on Jeff Gundlach dishing with Yahoo Finance on the vulnerability of the corporate bond market in the next recession.   In our data analysis piece, which we reposted below, we highlight the fact largest holders of U.S. corporate bonds are “weak handed” foreigners.   Given the diminishing market making capacity of the Street, good luck finding a bid when they decide to hit the exits.

Money quotes from the Bond King,

JULIA LA ROCHE: Right. Well, a lot certainly has changed, as you mentioned. And you’re someone who’s known as someone who always looks at risk. You look at various risks. So I’m curious, what is on your radar right now? What are you focused on?

JEFFREY GUNDLACH: Well, I think the biggest risk– and it may not materialize for a little while longer– is that when the next recession comes, there’s going to be a lot of turmoil because the corporate bond market is extraordinarily leveraged. The ratings of the corporate bond market are very low. There’s a study by Morgan Stanley research that said that if you use leverage ratios alone– and there are other variables that the rating agencies used, but the most important, of course, is leverage ratios of a corporation. And if you use leverage ratios alone, that 45% of the investment grade bond market would be rated junk right now. Right now.

So if there’s a recession, obviously, these ratings will have to be lowered. For now, the rating agencies are listening with sympathetic ears to reassuring statements by some large corporations that they’re aware that their leverage ratios are kind of high, but they plan on addressing that sometime in the next few years. If there’s a recession, it’s obvious that the leverage ratios will not be addressed, and the ratings will have to go. So that’s a really big risk.

Also, during the next recession, we’re going to have an extraordinary national debt problem, because the national debt is growing at a very rapid rate already. And we’re supposedly, if I listen to Larry Kudlow and the president, they keep telling me that it’s the best economy ever. I know that they know that they’re being hyperbolic. But it is a growing economy. Real GDP is 3% year over year of the most recent reading. And yet, the national debt in fiscal 2018, which ended September 20, was increased by $1.27 trillion.  – Yahoo Finance

Our latest data work on the corporate bond market is very interesting and kinda flew under the radar.  We repost it, right here, right now!

Ownership And Profile Of The Corporate Bond Market

We spent most of the day crunching numbers on the U.S. corporate bond market as stocks went on another roller coaster ride.  Given all the hand-wringing and concern over the buildup of corporate debt since the Great Financial Crisis (GFC), we have a real need to see and understand the data.

Who Owns The Corporate Bond Market

You now have the data and charts, folks.  Short and sweet, easy to read.

Now you have the knowledge and can’t claim you were unaware of the risks if the GE refrigerator falls through the kitchen floor. 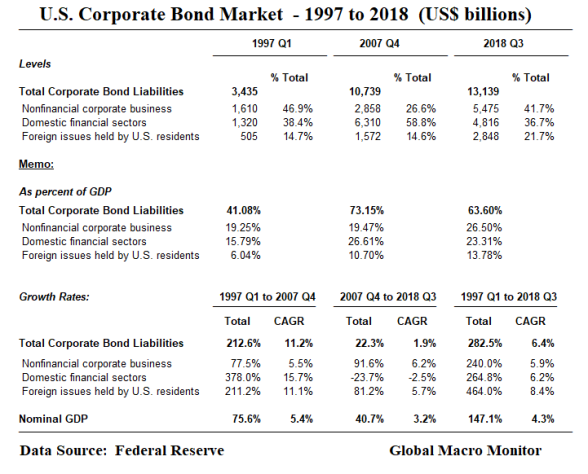 Help keep the lights on at the Global Macro Monitor.   Contribute any amount based on your perception of our value added by clicking the PayPal donate widget at the right side of the screen.  You don’t need a PayPal account just a credit card.  Thank you!

This entry was posted in Bonds, Uncategorized and tagged Corporate Bonds, Jeffrey Gundlach. Bookmark the permalink.