Caveat emptor.  The complacency in markets is absolutely stunning as the U.S. slowly drifts into, what could be, the biggest Constitutional Crisis in the nation’s history.

Trump lost the top legal analyst at Fox News today.  This is a major development.

Judge Napolitano told friends in 2017 that President Donald Trump had told him he was considering him for a United States Supreme Court appointment should there be a second vacancy.

In a scathing op-ed and accompanying video published Thursday, Napolitano said that special counsel Robert Mueller’s report on Russian attempts to influence the 2016 presidential election and Trump’s efforts to cover it up showed a clear pattern of criminal behavior.  – Yahoo News

We concluded within 15 minutes after the release of the Mueller Report last Thursday, after reading the first 20 pages, the House Democrats would have no choice but to move on impeachment.  See our Maundy Thursday post here.   We received major pushback.

The markets are totally clueless to the potential of a huge spike in major political risk in the U.S. during the coming summer.

Clinton’s impeachment coincided with the second biggest bull market in the 20th century and a super hot economy.   Nixon’s impeachment was battered by the headwinds of spiking oil prices due to OPEC I, which was in retaliation by Arab nations for the U.S. rearming Israel during the Yom Kippur War.

Many suspect the Arab nations sensed Nixon was too politically weak to help Israel, which was a major miscalculation, and almost led to a dangerous confrontation between the U.S. and the Soviet Union.

We just found this tidbit of history from Politico of how during the Watergate scandal the Nixon administration was melting down and the President retreated to self-medication,

The Nixon administration began disintegrating—the president unable to play his role as the leader of the nation and the free world—at 7:55 p.m. on October 11, 1973.

The newly appointed secretary of state, Henry Kissinger, picked up his telephone. His trusted aide at the National Security Council, Brent Scowcroft, was on the line from the White House. The Arab-Israeli war of 1973 was in its fifth day, escalating toward a global crisis and a potential nuclear conflict.

SCOWCROFT: The switchboard just got a call from 10 Downing Street to inquire whether the president would be available for a call within 30 minutes from the prime minister. The subject would be the Middle East.

KISSINGER: Can we tell them no? When I talked to the president he was loaded.

Wow!  POTUS was hammered as the world spiraled toward nuclear conflict and incapable of taking “the call.”

This further confirms our suspicions that domestic political scandals, such as Watergate, distorts and weakens the global perception — and maybe not just perception — of U.S. leadership in the world.   And contributed, at least, partially,  to the 1973 Yom Kippur War and subsequent economic crisis caused by the related OPEC embargo.  – GMM,  May 2017

Crude oil is up 43 percent year-to-date, the stock market is hovering around new highs but topping in our opinion, and the economy is slowing but who knows what will happen.  Let’s hope we don’t have a repeat of the above as China and Russia sense weakness and chaos in the U.S. but we don’t see how they cannot.

Thus the probability of a major geopolitical event or crisis is increasing as the White House will be obsessed with their coming battle with Congress over the next several months.  Taiwan, Iran, Venezuela, North Korea, Ukraine, or other? Take your pick.

Hollywood Can’t Make This Stuff Up

The activity of President Trump & Co. as reported by the Mueller Report is in a different zip code in terms of seriousness compared to both Clinton – lying about a blow job — and Nixon — obstructing the investigation of a break-in into the Democratic National HQ at the Watergate hotel.

The Mueller Report documents the Trump Campaign soliciting, meeting, accepting and benefiting from help from the Russian government, who hacked the 2016 presidential election.  Then trying to obstruct the investigation of those events.

Check out how dark (in a spiritual sense) this campaign poster is, which the Russian IRA put together for a campaign rally which they sponsored during 2016 in Pennsylvania.  The poster is directly out of the Mueller Report. 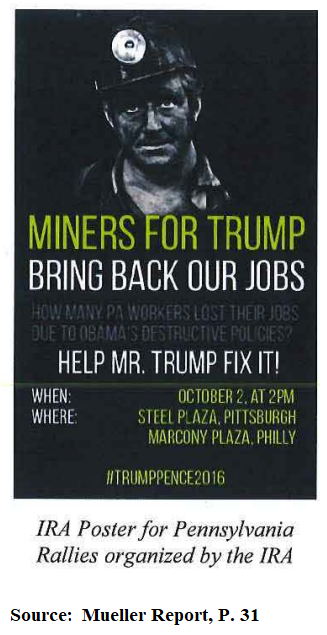 Don’t know about you but it really gives us the heebie-jeebies.

The man whose father [died of black lung disease in 1987] was featured in a pro-Trump Russian “Miners for Trump” propaganda ad speaks to CNN’s Anderson Cooper after it appeared in special counsel Robert Mueller’s report.  — See video of interview here

Less Than 30 Percent Of Voters Have Read Mueller Report

The latest Morning Consult/Politico poll states that only 28 percent of voters have actually read the Muller Report.  Anyone who just skims it is in for the shock of their lives.  It reads like a Tom Clancy spy thriller but, unfortunately, it is scary true.   Hollywood can’t make this stuff up

Once the report disseminates through the electorate, we suspect the dam could break.  It is now the number one best seller on Amazon.

failed without lawful cause or excuse to produce papers and things as directed by duly authorized subpoenas issued by the Committee on the Judiciary of the House of Representatives on April 11, 1974, May 15, 1974, May 30, 1974, and June 24, 1974, and willfully disobeyed such subpoenas. — Wikipedia

We are expecting a Summer of Discontent. That is increased political instability, which will eventually weigh on the markets.  We are the only out there with this call and it is not even close to the market’s radar.

This entry was posted in Politics, Uncategorized and tagged Impeachment, Mueller Report, Summer of Discontent, Trump. Bookmark the permalink.