Charts That Validate Stocks Are In The Process Of Topping

The S&P 200-day rolling return is an interesting chart but not much in the way of signals with the exception to illustrate the S&P500 does not fall out of the sky and enter bear markets after a strong 200-day run.

Bear markets usually begin with a topping process, after all, markets are cold-blooded beasts and adapt and rationalize their bullish biases to negative news and deteriorating conditions.   Until they don’t.

Inertia is innate in the stock market, in part due to Wall Street’s and the buy side myopic focus on the year-end bonus, but if equities can’t break out after making several local tops (see the second chart),  caveat emptor and be warned something is rotten in the state of Denmark.

We remain medium-term bearish on U.S. stocks based mainly on macro valuations as the charts below illustrate there is not much room for stocks to run from here.   Unless “this time is different”  and stocks  do grow to the sky.

Surely, the S&P500 will rally tomorrow on the announcement of the restart of China trade talks.   Is it sustainable?

Will the Trump concession on Huawei to get the Chinese back to the table, which is very bullish for the company’s American suppliers, soon be offset with concerns the Fed may now rescind some of its dovishness?

Our best guess, however, is given President Trump’s low approval ratings moving into an election year, he is highly motivated to kraft some sort of truce or Potemkin China trade, which will be sold as the “greatest deal ever,” to give the market one last boost.

Until the S&P clears 3115, we will maintain our medium-term view that investors should be reducing risk by selling into strength.  If the index does clear the key level, it will be time to suspend disbelief and move to the Venezuelan model of stock valuation.

A bear market could also ensue with time.  Stocks could churn and burn around these levels for years.  As of Friday’s close, the S&P500 is only 2.4 percent above its January 2018 local peak.

In the short-term, we have relatively high conviction traders will remain lathered up on the prospects — emphasis on prospects —of a China trade deal and Fed easing.  We don’t and won’t fight that.  No strategic shorts put out until the mid-3000 level unless the markets show clear signs of breaking.

Scalping the market with short-term buying and selling is a different story.  That’s getting harder and harder with the rise of Auto & Algos (AA), however.

In the long-run,  shorts are all dead. 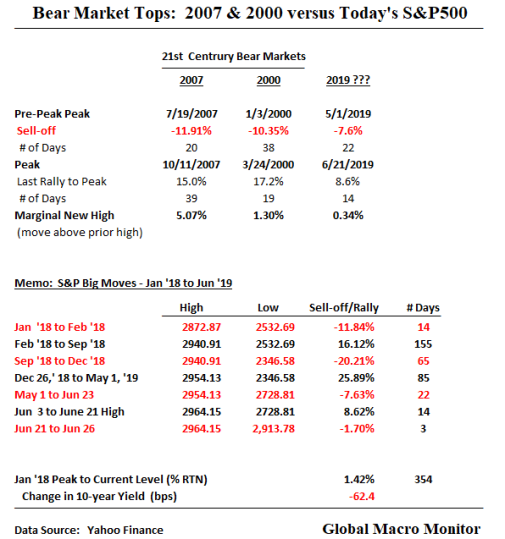 Stocks Expensive Based On Macro Metrics And History

This entry was posted in Equities, S&P500, Uncategorized and tagged Bear Markets, S&P500. Bookmark the permalink.