The road to a credible China trade deal just got a bit narrower and bumpier after President Trump all but recruited China for his 2020 campaign.  China may not accept but they do now have a tremendous amount of more leverage.   Don’t tell that to Mr. Market, which closed at its high of the day, however.

President Trump said he believed both China and Ukraine should investigate Joe Biden and his son Hunter https://t.co/xoSlBgLT5o pic.twitter.com/YxxVqDVnWu

It is also going to be hard for the body politic to now trust that POTUS is not self dealing in trade negotiations. whether true or not.  Perception is everything in politics. 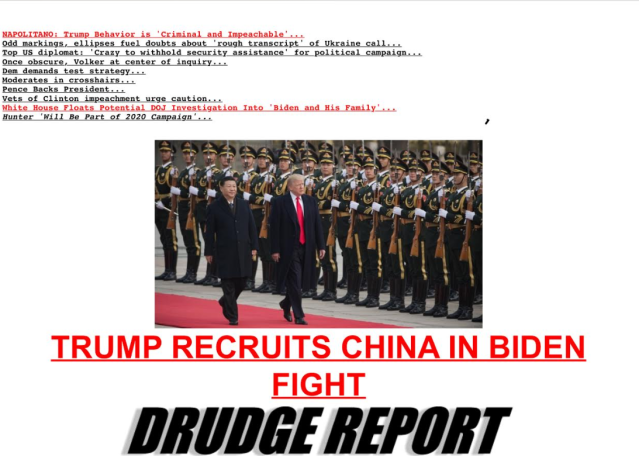 The rabbit hole just gets deeper and darker every day, and the path to extraction goes more foggy on the hour.

“China should start an investigation into the Bidens,” Trump said in remarks to reporters outside the White House. Trump said he hadn’t directly asked Chinese President Xi Jinping to investigate Biden and his son Hunter but it’s “certainly something we could start thinking about.” – AP

We do wonder how long the American public will maintain confidence in POTUS to negotiate for them in good faith,  especially now to secure a “good” trade deal for the country?   If the Trump team makes concessions to China, it could raise doubts they went easy in order to get some oppo for his campaign, for example.   That weakens the American negotiating position and lessens the chance of a deal.

During a phone call with Xi on June 18, Trump raised Biden’s political prospects as well as those of Sen. Elizabeth Warren, who by then had started rising in the polls, according to two people familiar with the discussion. In that call, Trump also told Xi he would remain quiet on Hong Kong protests as trade talks progressed.  –  CNN

The fact he sold the young people fighting for democracy in Hong Kong down the river is no surprise to us.  We posted about this in August.  See here.

Biden And The Swamp

We have no doubt the arms of the People’s Liberation Army (PLA) intelligence agency,  including the MSS, have the sophistication and technology to cook up, say, a deep fake video of Hunter Biden even bribing Jesus and generating a viral sensation on social media.

Or the Chinese could blackmail the Trump administration with the threat of releasing propaganda, such as a deep fake video of one of the negotiators offering a quid pro quo, say, easing up on Huawei for help with the campaign.

Yes, the whole Biden story of working for a Ukrainian gas company thing is extremely swampy, but not illegal, and will, if not already, hurt Uncle Joe’s campaign.

Hunter Biden’s swampiness pales in comparison to that of POTUS and family, however,

Since she has retained her foreign trademarks, the public will continue to have to ask whether President Trump has made foreign policy decisions in the interest of his and his family’s businesses,” CREW said in a post. “Her trademarks remain a potential conflict of interest as she continues to work on policy in the White House and meet with foreign leaders.” – CNBC

The above graft may be downright illegal if not unconstitutional.  Doubt if the Department of Justice will investigate it, however.

We leave you with the following tweet sent out this morning by the Chairman of the U.S. Government’s Federal Election Committee, Ellen Weintraub, just shortly after President Trump recruited China to his campaign.

For the Fox News viewers,  if you’re listening,  President Trump is reaching out to China for help on his campaign.   That is the Chinese Communist Party (CCP)!

Does Trump Have A Samson Complex?

It is hard to comprehend the current state of American politics, especially after what President Trump did today.  It appears now even the Drudge Report, which has a tremendous influence on the Alt-Right and led the charge on the Clinton impeachment, is starting to turn on him.

We saw how the President seemed to throw the VEEP under the bus the other day.

This leads us to ask the question: Does the President of the United States have a Samson Complex and is hellbent on taking down everyone and everything down with him?

…the life story of a psychotherapy patient to that of biblical Samson reveals that both men suffer from a behavioural disturbance, manifested in the compulsion to re-enact the experience of betrayal by women [Nancy Pelosi?], followed by destructive attacks of rage against others, and ultimately against their own tormented selves.  — Journal Of Medical Psychology

Rick Wilson, the Republican strategist seems to think so.   Similar to the biblical story,  where the blinded and shorn Samson says, “Let me die with the Philistines,” and then brings down the temple on himself and everyone else present,  Wilson thinks POTUS will do the same, at the very least to the Republicans.

Here is synopsis from Newsweek.

“Trump’s manic performance Wednesday was distressing to watch, even for his supporters. Far from being the master of transgressive politics, his anger and frustration are evident and ugly. He’s lost control of the story and of himself.

“Trump can’t keep the process running on his terms and his timetable, and it’s driving him deeper into what I call the Eccentric Dictator Phase of his Presidency.” — Newsweek

1 Response to Trump Is Now Compromised In China Trade Talks