JANUARY 7, 2020 — The U.S. Census Bureau and the U.S. Bureau of Economic Analysis announced today that the goods and services deficit was $43.1 billion in November, down $3.9 billion from $46.9 billion in October, revised 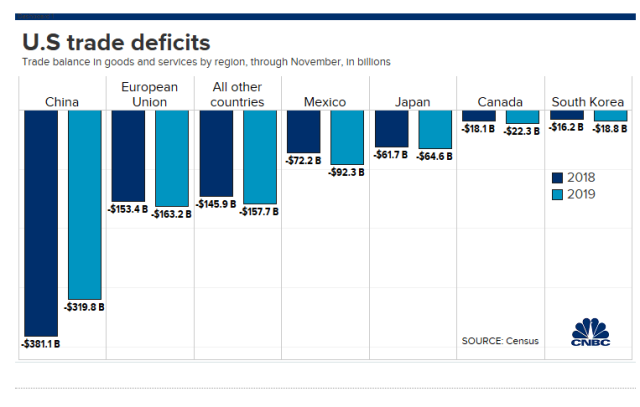 All of the improvement, and then some, comes from a $100 billion reduction in the merchandise trade gap with China.   We have also included the U.S, growing trade deficit with Vietnam in the chart below, which mirrors China over the past few years and illustrates the trade diversion caused by the tariff wars.

Some believe that supply chains will move en masse out of China to other areas, such as Vietnam.   True on a relatively limited basis but these countries are too small to scale and absorb even a modest move of supply chains out of China.   The data also illustrate that tariffs, when used as a tool for import-substitution — i.e., a policy to move supply chains back onshore — are relatively ineffective.