Is the rise of the global populism the result of a mismeasurement of inflation?

“Look around the world, I see small revolutions everywhere, in France with the gilets jaunes, Brexit in the UK, the election of Trump. I see a lot of angry people. You know, I grew up in France, so I had a good dose of Marx in my education. The first thing Marx teaches you is that revolutions are typically the result of inflation. Marx was wrong about many things, but he was right in that inflation is a deeply destabilizing force.”  — Louis-Vincent Gave, CEO of Gavekal Research,

Seeing lots of inflation as we enter the New Year — from milk and Subway sandwiches to big price spikes on restaurant menus.   It’s anecdotal and we have no doubt the government statisticians will find a way to massage the price hikes away.  They always do as they need to do.

It now looks like retailers are passing on the relatively large increases in the minimum wage that went into effect on January 1st — between 8-15 percent in some California cities  — to consumers.

Maybe that’s partially why the stock market is going apeshit –margins are safe?

While the federal minimum wage hasn’t changed in more than a decade — it’s still $7.25 an hour — many cities and states have adopted higher thresholds. In Arizona, Colorado and Maine the minimum wage is already $12 an hour. Minimums are higher still in California, Massachusetts and Washington state. – NPR

There is no doubt the White House will be taking a victory lap even though they had very little direct impact on the recent minimum wage increases.  The strong labor market does make them doable, however.

Moreover,  does it really move the needle for the standard of living of someone increasing their hourly salary from $12 to $13 per hour?

Apparently, for the high school and less educated it does improve mental health.   A new academic study speculates that raising the minimum wage can reduce the suicide rate for non-college educated workers,

The new study suggests that raising the minimum wage in every US state by $1 between 1990 and 2015 could have prevented somewhere in the region of 27,550 suicides.

…the researchers estimate a 3.5-6 percent reduction in the suicide rate for every dollar increase in the minimum wage – that’s for those with a high school education or less (a group that saw 399,206 suicides between 1990-2015), with higher drops likely during periods of high unemployment.  — ScienceAlert

We really didn’t think the minimum wage rate was binding in California as some companies pay a much higher starting hourly wage for unskilled labor.

Recall our post from April 2018 with the photo I snapped at an In-N-Out in Marin County. 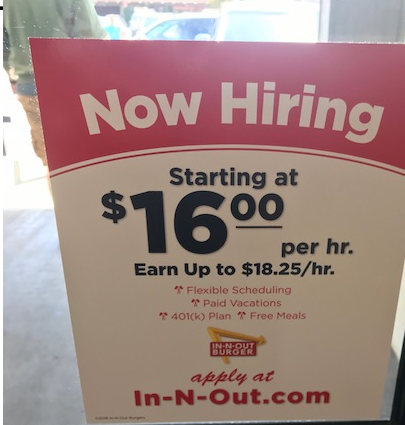 That’s a starting hourly wage of $16.00 to flip burgers, folks, which is close and, in some cases, more than what some high school substitute teachers make.

We are economists and do believe a binding minimum wage will reduce employment, which depends more on the local labor market and small business conditions.   Because labor supply and demand curves are not observable in the real world, it’s always difficult to definitely forecast the ultimate outcome and must be done on a case-by-case basis.

As I checked out at the grocery market the other night,  I mentioned to the cashier how surprising it was to see so many 10 plus percent price hikes on store items.  We then launched into a discussion about the recent increase in the minimum wage, which I perceived that it applied to her.   It wasn’t that long ago when a checker at a major grocery store was a decent middle-class job.

She responded something to the effect,

“A lot a good the wage increase is going to do, if we have to pay higher prices for food and other things.”

She sounded like an economist pontificating on real wages!  She may not formally understand the laws of economics but sure acts as if she does.   Sorry, Noah, I still like Friedman’s pool player/physics analogy.

If there is anything that will blow up the huge global bond market bubble, which will then torch the stock market bubble, it will be the realization that inflation is on the rise.  Mr. Market has been so gaslighted into thinking there is no inflation and that deflation lurks behind every 5 percent correction in the S&P500.  He has to believe, however, as the perception of this bull market’s longevity depends on it.

Because the market believes this, the Fed has to do it’s rain dance the central bank will ride to the rescue of every market downturn an extinguish the perception of an imminent deflationary economic collapse.  There doesn’t appear a path of extraction from this silly policy as the markets and central bank relationship is far beyond the tipping point and now exorbitantly linked.

We have been preaching, pounding the table, and debating for years that the official inflation numbers do not reflect life in the real world.  The government has a big incentive to keep the inflation rate low as 50 percent of Americans are dependent on government entitlement programs, many of which have cost of living adjustments (COLA) linked to the change in the CPI index.    Higher inflation = bigger deficits.

We were very pleased to have stumbled upon an interview with Louis-Vincent Gave, CEO, and co-founder of Gavekal Research last October.  Gave is one smart dude and he confirmed our suspicions, and then some,

I don’t buy the argument that we have deflation everywhere.

Look at the median CPI in the US: It’s at a ten year high. Look around the world, I see small revolutions everywhere, in France with the gilets jaunes, Brexit in the UK, the election of Trump. I see a lot of angry people. You know, I grew up in France, so I had a good dose of Marx in my education. The first thing Marx teaches you is that revolutions are typically the result of inflation. Marx was wrong about many things, but he was right in that inflation is a deeply destabilizing force. We are being told today that there is no inflation, but if you take a basket of the 72 most bought items at Walmart, the price of that basket is up 4,8% year on year. So, if you are among the poorest people in America and you buy your Walmart items, your cost has gone up 4,8%, while your wages go nowhere. Should we be surprised that people are angry?  –  TheMarket

There are a lot of gems in this interview, folks, and we implore you to give it a thorough read.

Prices In The Real World

If you want a good idea of what real prices on real things and real services are really doing in the real world follow the Chapwood Index,

The Chapwood Index reflects the true cost-of-living increase in America. Updated and released twice a year, it reports the unadjusted actual cost and price fluctuation of the top 500 items on which Americans spend their after-tax dollars in the 50 largest cities in the nation.  – Chapwood Index

Stay tuned, folks, we will be pounding the table even harder in 2020.

Just a heads up.  The Global Macro Monitor will soon be moving to a subscription-based model, which will restrict some premium posts to subscribers only.   We have researched and thought long and hard about the fee.  We have many readers from weak currency countries and don’t want to price them out.   We are contemplating a low monthly nut of, say,  around $10, which is fair and should attract enough subscribers to make it worth our time.  Free to $10 is inflation, no?  Stay tuned.

This entry was posted in Bonds, Inflation/Deflation, Uncategorized and tagged Inflation. Bookmark the permalink.