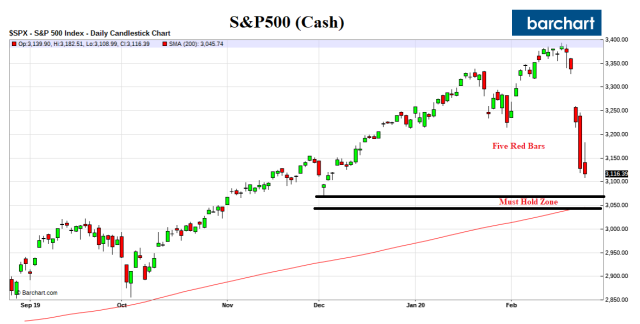 Such an ungodly losing streak is relatively rare and has not happened since the 2018 nightmare before Christmas bear market — yes, don’t let the idjits mislead you, Q4 ’18 was a bear market from its September intraday high to the Boxing Day intraday low (-20.21 percent).

Red candlesticks are usually associated with bear market action.  The market closes lower than its opening trade.  The opposite price action is true in bull markets.

“If that December low is taken out to the downside in the first quarter of the new year, watch out.”  – Jeff Saut,  CNBC

No Confidence In Global Leadership

The markets don’t seem to have much confidence in the world’s leaders to contain the coronavirus and/or manage the public’s confidence.  This is especially true after the Trump administration,

In 2018, … fired the government’s entire pandemic response chain of command, including the White House management infrastructure. In numerous phone calls and emails with key agencies across the U.S. government, the only consistent response I encountered was distressed confusion.  —Foreign Policy

The markets are also calling bullshit on the economic containment nonsense.  The global economy is currently falling off the cliff but markets still hanging on to the hope of a V-shaped recovery next quarter.

Stunning to hear the former ECB President, Jean-Claude Trichet today engaging in a discussion where the EU countries would even contemplate closing its borders.  He was not advocating for, by the way.

If the Schengen Treaty is compromised, which we doubt it will be, it could spell the end of open border Europe as we know it, and a massive acceleration of deglobalization.  Bad, bad, bad for markets and the global economy.

We’re not touching this market as the chart below illustrates valuations are just back to the level where the 2018 nightmare before Christmas began.   The market has to deal with its valuation problem before it can heal itself and the Fed, in our opinion, should step out of the way and allow it to happen.

However, the fact the overnight S&P traders seemed to have thrown in the towel after Trump’s speech, methinks increases the probability of a green candlestick tomorrow.  Green candlesticks equal green shoots for a potential short-term tradeable bounce but maybe not before setting a humungo panic-driven bear trap by piercing the 200-day and then reversing.   Wait for it.

But, hey, like everyone else, we don’t know f*$k all how this plays out.

This entry was posted in Economics, Technical Analysis, Uncategorized and tagged Coronavirus, S&P500. Bookmark the permalink.