The price action in stocks continues its remarkable volatility.

The following headline sums up why we know stocks were sold after the Fed cut.

Back to the analogy of the town facing a hurricane: We are in an unusual situation in which the local government doesn’t seem to be laying sandbags effectively, and many of the local businesses in charge of the top priority response are moving slowly and failing to inspire confidence.

So people in this town might put more focus on the actions of the bankers than is warranted.

That is exactly where the Federal Reserve found itself Tuesday morning — doing what central bankers do, and hoping that public health authorities and fiscal policymakers in Congress do their jobs as well.  – NY Times

Let’s hope they hear it, quit beating on the Fed, and right the course.

V.P. Pence Off The Ticket?

The only thing falling faster than the Dow is the odds of Mike Pence remaining on the ticket in November.  See our latest post here.   Some definitely believe the VEEP is being set up to be the scapegoat if the current crisis moves sideways. 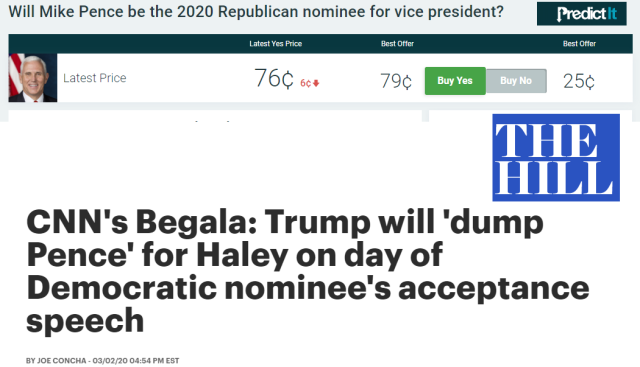 “This is not a prediction. It’s a certainty. On Thursday, July 16 — that’s the date the Democrat gives his or her acceptance address — on that day, to interrupt that narrative, Donald Trump will call a press conference at Mar-a-Lago. He’s going to dump Mike Pence and put Nikki Haley on the ticket to try to get those suburban moms,” Begala predicted during a panel discussion at the American Israel Public Affairs Committee’s (AIPAC) conference in Washington, D.C. — The Hill

We don’t have much confidence in the current government and expect more scapegoating, which will only make markets slide further.  He just can’t help himself.

So, the Coronavirus, which started in China and spread to various countries throughout the world, but very slowly in the U.S. because President Trump closed our border, and ended flights, VERY EARLY, is now being blamed, by the Do Nothing Democrats, to be the fault of “Trump”.

Rep. Mark Pocan has condemned the CDC for its "inexplicable" decision to stop publicly disclosing the number of Americans who have been tested for the novel coronavirus. Their site apparently no longer discloses the number of tests or the number of deaths. https://t.co/oyczK5o3qG

As the government ramps up testing for the coronavirus, the number of cases will spike, which will put further pressure on the market and rattle a nervous public.

Most disturbing of all: Did a failure to provide adequate testing give the coronavirus time to gain a toehold in the United States?

“Clearly, there have been problems with rolling out the test,” said Dr. Thomas Frieden, former director of the C.D.C. “There are a lot of frustrated doctors and patients and health departments.”  – NY Times

Gaining the public and markets’ confidence the government is taking this health crisis seriously and have a viable plan to bring it under control will be much more powerful than moving the Fed Funds rate to zero resulting in the Japanification of the U.S. economy.

However this health crisis unfolds, the market still has to deal with its big valuation problem.

This entry was posted in Equities, Uncategorized and tagged Coronavirus, Stock Market. Bookmark the permalink.