Battle OF The Fibos & The Negative Yield Wall

Traders and ‘bots are clearly in control of this market.

Be careful out there, folks, the shorts have been destroyed in the big bounce off the March 23rd bottom and there is very little holding up this market now x/ hope, delusion, and the specter of more financial asset shortages, in our opinion.

Moreover, there is little room in yields for bonds to now be used as a stock market hedge or short proxy.

Though it’s possible the trading momo boyz & ‘bots may believe Jerome Powell will take them out of their longs at -2.0 percent, we have our doubts as it will create a real problem for the Fed and Treasury.

It’s [negative interest rates] an unsettled area. I know that there are fans of the policy, but for now, it’s not something we’re considering. We think we have a good toolkit, and that’s the one we’ll be using.” – Chairman Powell, May 13th

Though the Chairman was likely referring to only policy interest rates, it is not clear that if traders pushed U.S. notes and bond yields into negative territory the Fed would be there to buy as part of their QE program.  If they do, imagine the shit show this would cause with the monthly Treasury auctions.

Treasuries are not German bunds and have polar opposite supply technicals.  The former with “trillions upon trillions” of new issuance coming and the latter as scarce as hand sanitizer and a 2020 Yankee game, the result of perennial budget surpluses, making the border crossing into the negative yielding promised land a cakewalk.  Not so for Treasuries, however, as massive deficit financing has erected a border wall at zero percent that only President Trump can fantasize about.

It’s not that hard to issue a few billion euros of negative yielding German bunds but super-sized billion dollar Treasury auctions with negative yields?  Forget about it.

How could any fundamental real money fiduciary responsibly purchase an asset that is guaranteed to lose money if held to maturity?  Maybe long-term bond investors have gone the way of the Pterodactyl.  It’s pretty safe to say the 40-year jig in bonds is over.

We suspect the momo boyz and ‘bots don’t have the firepower to climb the wall into negative yielding territory but if the Fed is taking down most or all of the new issuance and then some, you just never no.  Stunning, at least to us, how some bond bulls have no clue about this as they take their pyrrhic victory laps on Twitter.

Do the ‘bots and momentum boyz have this context and understand what is at stake?  More important, do the policymakers?

What. An. Absolute. Fricikin’ Mess. 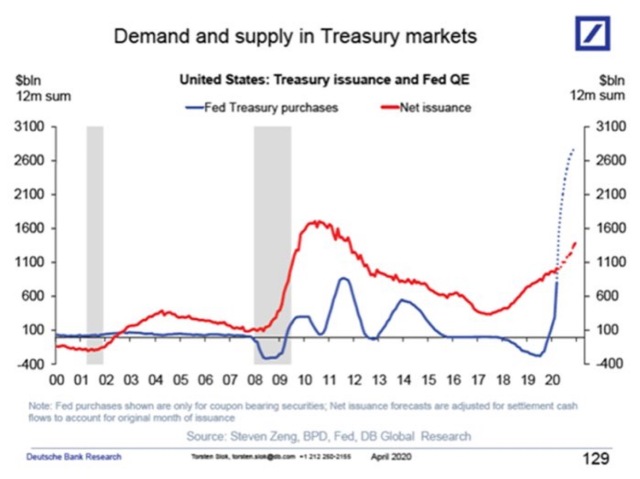 Here’s to hoping and let us pray money demand in the U.S. remains infinitely elastic as our policy morph into MMT depends on it. Good luck with that.

17 Responses to Battle OF The Fibos & The Negative Yield Wall