Corrections
Correction posted at 8:41 PM PT, November 2 –  Our original post earlier this evening assigned too many EC votes to Michigan, 26 instead of the correct 16.  We have now corrected the mistake and made the appropriate edits.
Correction posted 11:56 AM PT, November 3 – A friend pointed out this morning we had Rhode Island, the bluest of blue states, in the worng colunm for Trump.  We have moved the states 4 EC votes over to Biden and made the appropriate edits.

I will never forget the election-eve of four years ago.   The members of my debate club had been making predictions on the outcome of the presidential elections going back the last 12 years.

I held out making mine until the last minute and popped into Barnes & Noble just before they were closing.   I noticed the “Madame President” magazines had already been placed on the racks.   Bad omen, I thought.

I emailed my prediction when I got home.

The skeptical emails came back,  “are you sure?”

Ironically, from the same people that are trashing the election prediction that my daughter and I came up with tonight as part of a thought experiment for her government class.

Though these numbers are distorted by the COVID pandemic and thus lots of noise, we think much of the new turnout will come from the younger generations, who overwhelmingly support Biden;  and from those coming out to vote against the President, not to reaffirm his presidency.

This is not that far from the predictions we made in April.

We suspect a Blue 1980-ish outcome in the popular vote where Trump wins around 41 percent of the popular vote (close to where he is currently polling), which is about the same percentage as President Carter won, but wins a bit more than the six states than Carter did in the electoral college.

We also think this may be even too conservative and Biden could take Ohio and Texas, which would give him 412 electoral votes versus 126 for Trump.

Of course, we will be off and wrong on many of the numbers below but we’re in the arena, folks.  Heed the words of TR and hold your stones before casting them at those who stumble in the arena. 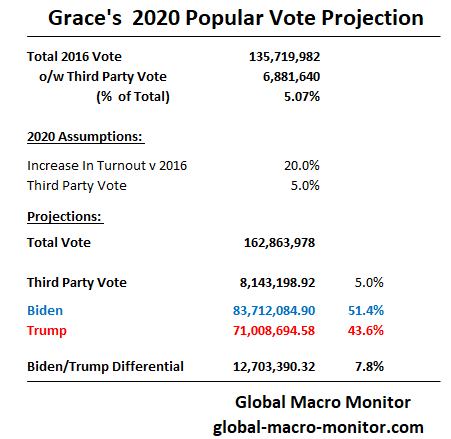 This entry was posted in Politics and tagged Prediction, Presidential Election. Bookmark the permalink.