Apple Sliced 6% in After Hours Trading on 14% Earnings Beat

Wow,  a company beats earnings estimates by 14 percent and they take the stock down 6 percent.  What gives? 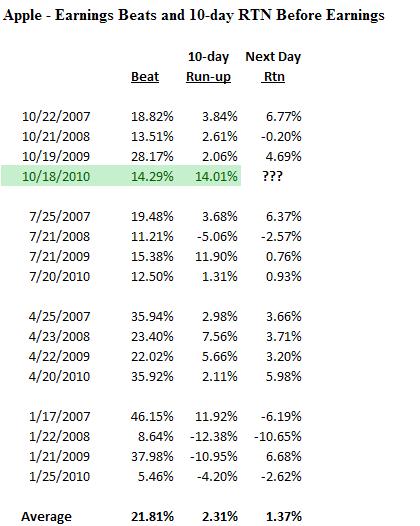 Yesterday we posted, Apple Needs “Big Mama” Beat to Keep the Markets Rolling, which stated given the huge stock price run-up into earnings,  Apple needed to beat  by at least 30 percent.   Now everyone is scrambling to “retrofit fundamentals” to explain the sell-off.  Futile, in our opinion.

The stock was up 14 percent and had not had a down day in the past 10 trading days.  That is a  high hurdle even for Apple.   Let’s see how the stock settles in tomorrow.

Our sense is this is typical “sell the news” profit taking and we’ll be looking to buy when the dust clears.   We don’t think the market is finished with the Apple story just yet.   We are also watching the overall market closely and expect the reaction to Apple to trigger a correction in risk assets.  A small correction and some consolidation will make for a nice set-up for a year-end rally.

We found a couple of interesting nuggets in the earnings release.   First, the IPhone and IPad were 57% of total revenues compared to the IPhone’s 38% in 4Q2009.  Both are lower margin products, which may cause some concern.   Second, Asia Pacific is now 13.4% of revenues compared to 8.7% a year earlier.   The America’s revenue share fell to 35.3% from 42.9%.   We’ll have more to say later in the week.  Stay tuned! 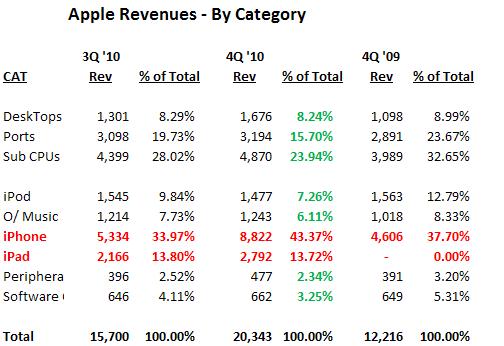