Let’s be honest and a little humble as we venture into the “great wide open” of 2011. Nobody really has a clue what path the markets will take.  Given what we’ve all been through and the uncertainty and plethora of risks going into the new year, we feel a bit like Rod Taylor and Teppi Hedren mid-movie into Hitchcock’s,  The Birds.  And those sea gulls look a lot like black swans to us.

The anxiety of the uncertain future causes investors and traders like us to seek out gurus, astrology, and ghosts of markets past to provide some comfort and conviction as we develop a trading plan for the upcoming year.   One market analog that many very smart people follow is the Presidential Election Cycle developed by market historian Yale Hisch.

We averaged the daily returns of the nine years and extrapolated them into 2011 based on an S&P500 ending 2010 at 1265.   It’s an interesting chart, but the averaging really smoothes out the noise and volatility.   But, hey, maybe that’s why the VIX at 17, no?   We also tested the analog against actual data in 2003 and after diverging early in the year, the S&P500 tracked its historical Year 3/First Term trajectory surprisingly well.

Finally, Jeremy Grantham finds the Presidential Cycle oddly performs even better in foreign markets, including the U.K..  He writes,

Never fight the Fed about market prices or underestimate its global reach. The U.K. stock market has been more responsive to the U.S.’s Year 3 stimulus than the U.S. market has itself. It shows Britain in its true colors: half a hedge fund and half the 51st state.  How humiliating!

This time may be different and the only thing we can say with certainty is the market will be more volatile than the trajectory of the S&P500 illustrated in the predictive chart.   We’ll also say with much less certainty, however, we believe the S&P500 will be higher and much wider (more volatile) next year.  Have a great New Year! 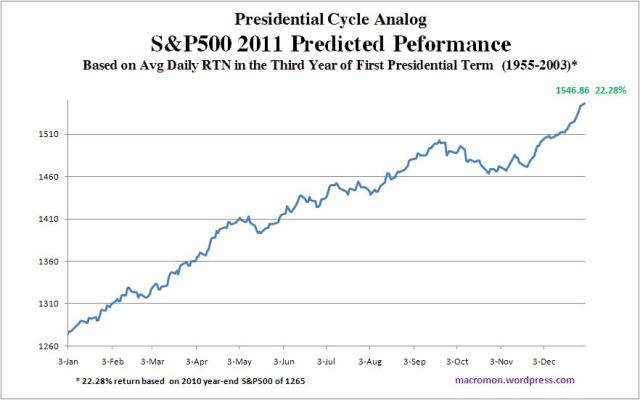 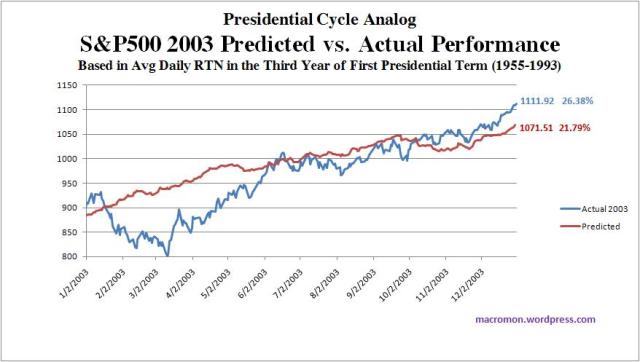 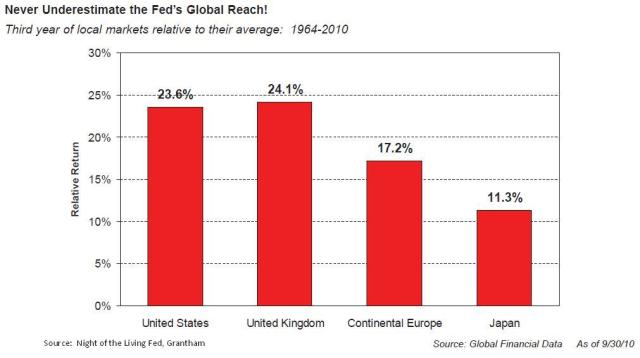