Is the Correction Camp Too Crowded?

We posted yesterday that the S&P500 was set up for a pullback after carving out an outside day (higher high and lower low than previous day) at strong resistance and looked for follow through selling today.   Didn’t happen.

In fact, the S&P500 followed yesterday’s outside day with an inside day with today’s high/low lower/higher than yesterday’s.  This reflects a lack of sellers and nervous buyers.

An inside day following an outside day is a relatively rare three-day pattern and has initially happened on six times since the current bull market began on March 6, 2009.    In every case, the post 5-day return on the S&P500 was positive, averaging 2.08 percent.

As of today’s close, the S&P500 is up 25 percent in the 1o3 trading days since the October 4th low.    The market does feel like it lacks sellers and needs a real catalyst to knock it down, in our opinion.   Interestingly, there are 13 trading days to the March 20th Greek bond maturity, which could suffer complications and provide the catalyst for a global equity correction.

Like many — maybe too many – we remain cautious and do look for a pullback after such a big move but do respect the trend and history.

Good luck out there! 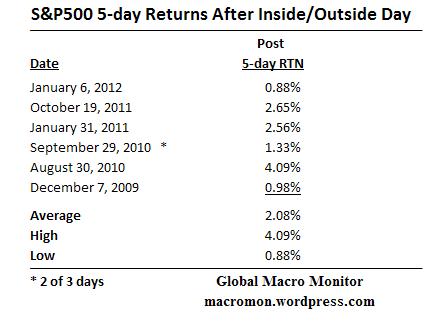 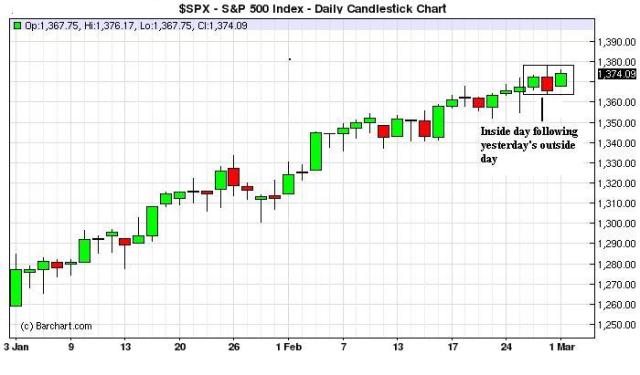 4 Responses to Is the Correction Camp Too Crowded?