Emerging markets are finally starting to find a bid.  The Brazilian Bovespa, after a nice reversal on Friday, came into the week down almost 10 percent with most other emerging market equity indices lagging the S&P500 in a big way.  Dogs that   haven’t hunted.

As the global markets internalize and works through the implications of the Bank of Japan massive quantitative easing and its affect on capital flows,  on top of continued Fed QE,  EM equities are finally starting to move.   Only so much capital can flow into the U.S. without it spilling over and looking for a home in other markets.   We’re betting on a “spillover” trade and the reallocation effect as investors become too overweight the U.S. based on relative performance.

Here’s what we said over the weekend:

It’s becoming increasingly difficult to extract market signals as the massive of flood of Bank of Japan money printing begins to flow into the global tributary, which also includes the Fed’s quantitative easing.   Markets, in our opinion, are going to become incredibly gummed up and exhibit unprecedented and unpredictable behavior throughout the rest of the year.

Who would of thought the dollar/yen pair could rally 50 percent from April 1995 to April 1997?   The yen carry trade fueled massive flows into the emerging markets,  pumped up  the U.S. dotcom bubble, and distorted Asian exchange rates…

The ETFs do reflect currency movements along with equity returns.     The chart of the Mexico (EWW) looks a good with a classic breakout move and Brazil, we think,  has a lot of room to catch up.

We may be , and are often, wrong and recognize the liquidity trade is dangerous in the long run and can reverse on a dime.   The long run doesn’t put food on the table, however.

Always with a stop. 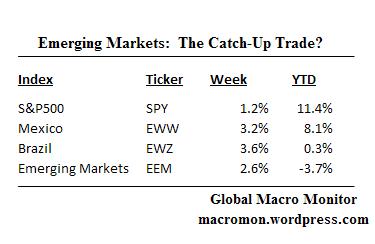 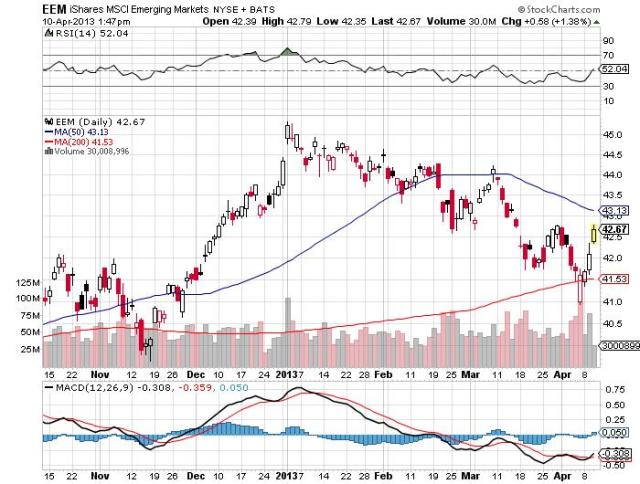