The spread widened by about 5 bps this past week.   Macron still holds a slight lead in first round polling over Le Pen.   France’s Polling Commission of false reports by Russian news agencies,

France’s polling watchdog has issued a warning over what it says is a misleading Russian news report claiming that François Fillon, the scandal-struck conservative candidate, has regained the lead in the presidential race.

The Polling Commission criticised a French-language report by Sputnik, a state-run Russian news agency, for presenting a social media survey by Brand Analytics, a Moscow-based online research firm, as a “poll” showing Mr Fillon as the front runner.

In fact, French opinion polls, which are strictly supervised by the authorities, show Mr Macron leading on about 26 per cent, with Marine Le Pen, the Front National leader, one point behind. – Telegraph 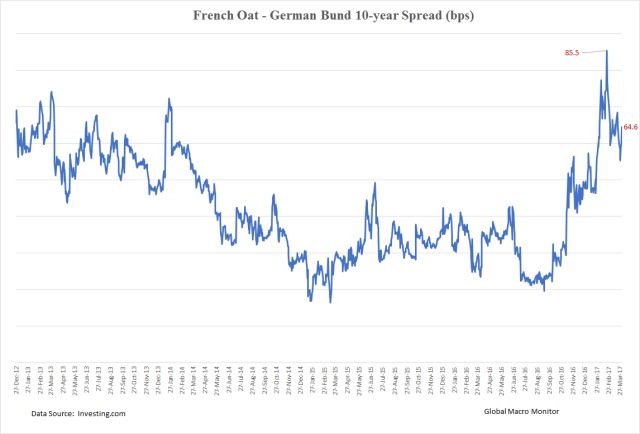