The S&P500 had closed at the high of the day on Friday and also what was the high of 2018. We warned to watch the German 10-year bund yield because Europe is where big bond bubble is.

Because the eurozone is where the big bond bubble lives.

Though the euro periphery is now in Convergence 2.0 mode on hopes of eMac’s vision of a more integrated ‘zone, the German 10-year is at a critical level, and yields only 63 basis points in an economy that is probably growing close to 5 percent on a nominal annual basis. It reflects a stunningly loose monetary policy and a central bank way behind the curve.

A spike in bund yields could put further pressure on U.S. bond yields and may be the trigger for the long-awaited and ever fleeting equity market correction. – Global Macro Monitor

What went little unnoticed today, is that the German 10-year yield traded with an 80 bps handle before falling back into the close. It has not been up there since the summer of 2015 and is now only about 15 bps from busting out Into The Great Wide Open, where there is little resistance  until 2 percent. 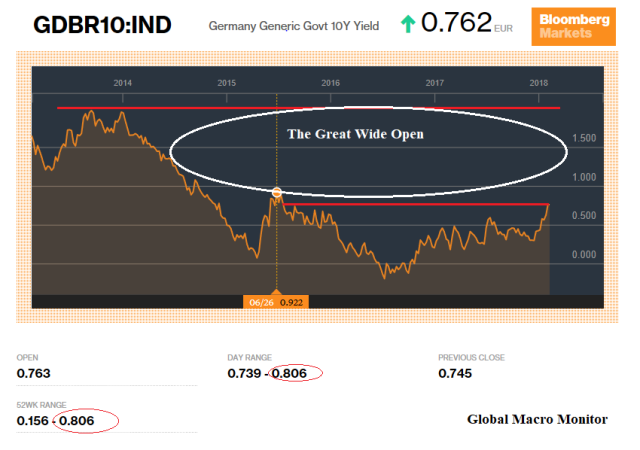 That would do some major damage to the U.S. bond market, pushing 10-year yields through 3 percent and further resetting equity valuations.

We are also looking at how far behind the curve every major central bank is in raising their policy rates. Charlie’s table below shows that even though the global manufacturing PMI is at a seven-year high, all the major central banks of the world still have negative real policy interest rates.

Any wonder why the great Paul Tudor Jones fears we are on the eve of a great inflation?

Furthermore, U.S. fiscal promiscuity appears to have resurrected the bond market vigilantes. Haven’t seen those buzzards in over twenty years.

We have a growing economy, the labor market’s tight, we don’t have a lot of idle resources,” said Matthew Mitchell, the director of the Project for the Study of American Capitalism at the Mercatus Center at George Mason University. “Basically, the very best argument for Keynesian economics doesn’t apply now. So it really is the time to be austere.” – NY Times, February 6

In fact, the current supply and demand dynamics of the bond market are not favorable.  On the supply side, the U.S deficit is skyrocketing.

Demand for U.S Debt is diminishing.  The Fed, which has financed almost 100 percent of U.S. deficits over much of the last ten years are gone and now running off their Treasury book.

Furthermore, foreign buyers, who own more than 50 percent of the stock of marketable long-term Treasury bonds, now appear hesitant to buy more, either because they are full up and/or they fear dollar weakness, due to the perception that U.S. leadership in the world is declining and not helped by Mr. Mnuchin’s dollar faux pas in Davos.

To conclude, we believe it is the above two factors, among others, that are putting the fear in the stock market.

Is it a change in fundamentals as the financial pundits overwhelmingly dismiss?

We think so but it is more complicated.   David Darst of Morgan Stanley couldn’t put it better,

As we write, the S&P500 looks to open up over one percent. Hope it holds as it needs a strong close on a Friday afternoon to stabilize.   Not the norm for Fridays,  however.

Markets do need some help to stabilize, but central banks are not there yet. The sell-off has thus far been “small potatoes” in the words  of NY Fed President,  Bill Dudley.

Another 10 percent down it will be time for the sequel to the Bonds With A Draghi Tattoo.

66 Responses to Watch These Spaces