Textbook Progression To A Bear Market

OK.  Not a bear market quite yet.

We believe there will be a stock bear market in 2018 but less confident on its depth and length, however.   We will turn that page, if, and when, we get there.

The following table is updated with some key economic indicators and S&P target levels. 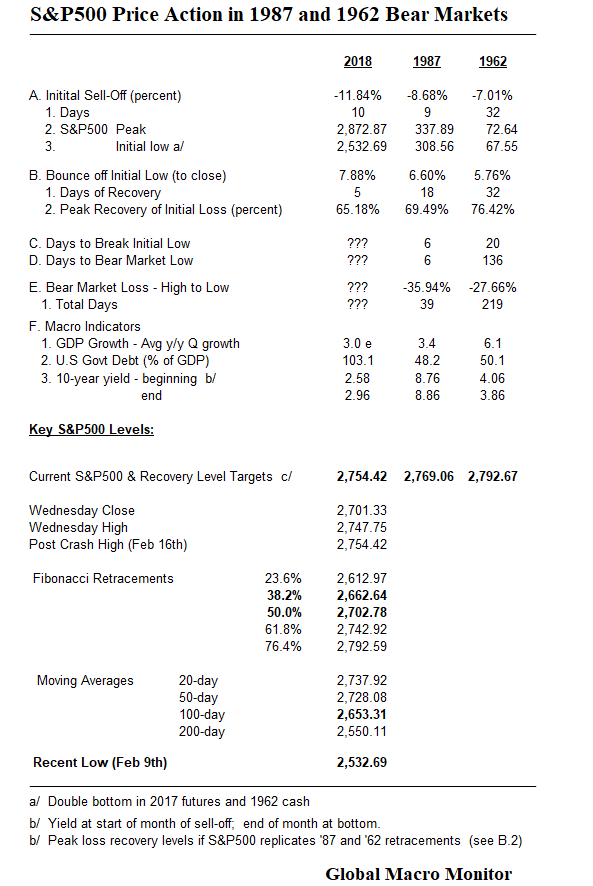 Recall in our earlier posts (see here and here), there have been three other massive volatility shocks since 1950,  similar to the one the S&P500 just experienced.

We threw out Ike’s heart attack as it was not a prelude to a bear market.  The S&P500 recovered shortly after the sharp Monday sell-off after President Eisenhower had a heart attack on the 8th hole at Cherry Hills Country Club the prior Saturday afternoon.

Bear Markets Do Not Happen Without Recession?

To that, we say, poppycock!  Time to tune out the cheerleaders.

Before the early 1980’s, the U.S. economy experienced much higher short-term volatility. The FRED table illustrates the dampening of volatility over the past 30 years, though at much lower growth rates.  Economists refer to this recent period as The Great Moderation.

The current U.S. government debt-to-GDP ratio is more than double what is was in both the 1987 and 1962 bear markets.  It is the crux of the current sell-off, in our opinion.

We sense that the global markets are growing increasingly concerned about high debt levels in a rising interest rate environment.   Couple that with Washington’s fiscal promiscuity and extreme valuations and overbought conditions, and the ingredients of a bear market are baked in.  It is also probably why the dollar is so weak.

We can make a very bearish case with debt doom loops and all kinds of macro instability, but won’t go there until price discovery takes us there.

Notice how the market traded today.  Up big then reversed as the 10-year yield spiked through 2.95 percent.

Interest rates were not a concern in 1962 as the data show the 10-year yield declined 30 basis points during the bear market.  Not the case in 1987,  however, where  rising interest rates and a weak dollar culminated in the October 19th global stock market crash.

Some possible reasons for the stock market crash of 1987 and for the rapid psychological shift of the market participants:

Normal Path To A Bear Market

In other words, last week’s recovery was a normal bounce off the initial lows on the path to a bear market.

Also watch the bearish cross as the 20-day moving average trades through the 50-day, which is not far off.

Though the S&P500 has the same theme, set-up, and backdrop as the JFK post-election rally and bear market in 1961-62,  the fundamentals drivers of the current correction are very similar to those of the 1987 rout (see above). 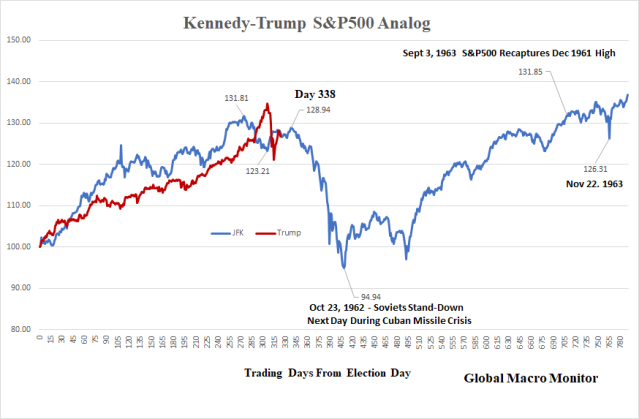 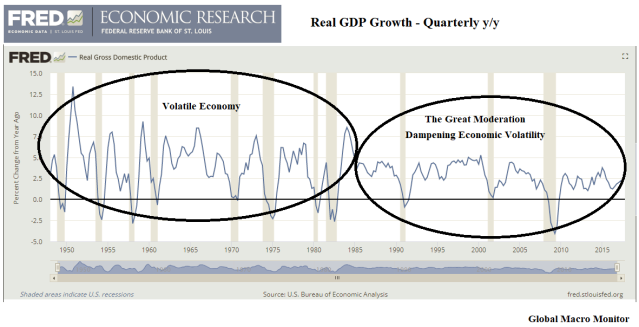 21 Responses to Textbook Progression To A Bear Market