Stocks And Bonds Now Joined At The Hip

The U.S. stock market rallied Friday on the six bps decline in the 10-year Treasury yield.  The S&P500 has now recovered 63.09 percent of its peak-to-low loss.  We are looking for 2,805 on the S&P500 for a green light and believe this level can only be obtained and sustained with a decent bond market rally.  Unlikely, however, in our opinion. 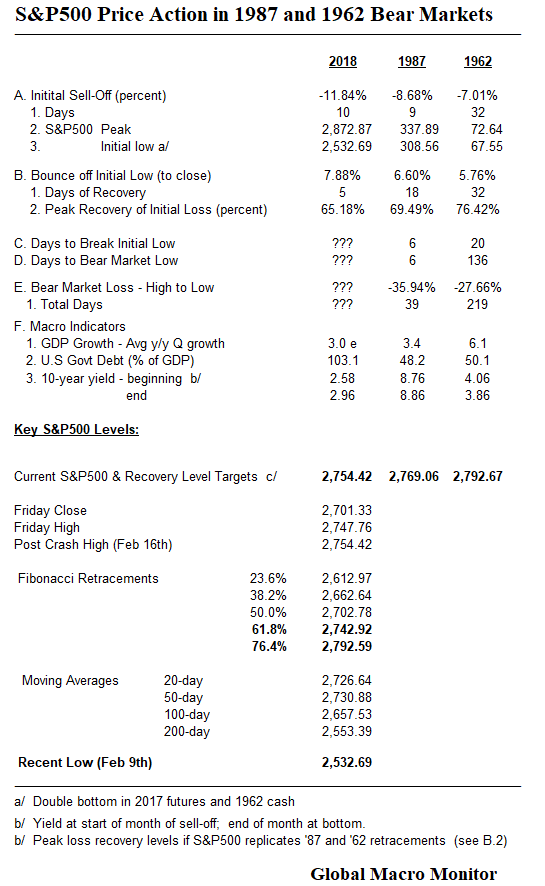 Since the correction began on January 29th, the S&P500 has moved the same direction with the bond ETF (TLT) 15 of 19 days or almost 80 percent of the daily moves.  The two had tracked each other this closely only three other times since 2002 when TLT was created (see chart).

Over the past three weeks, the relationship has reversed dramatically.  Rising interest rates are now an anathema to the stock market.     We believe this is due to market concerns about three major structural factors that are unlikely to fade anytime in the near future.

First,  the stock of global debt has increased as a percent of GDP over the past ten years in all sectors with exception of the financials.  The big increase has been in government debt though some has been offset by the G4 central bank debt purchases through their respective quantitative easing programs.

The corporate sector is also vulnerable to rising interest rates as their debt relative to the economy has largely gone to finance stock buybacks in the U.S. and dubious investments in China.

Now that the debt fears are squarely on the radar of the stock traders,  the relationship between stocks and bonds has reversed and is likely to be sustained.   Rising interest rates will be now be a stiff headwind to stocks prices.   This wouldn’t be the case and the cheerleaders would be right that rising rates won’t hurt stocks, IF debt and valuation levels were not so high.  But that, of course, is not the case.

Funding Of The U.S. Budget Deficit

Second, fiscal promiscuity in Washington is likely to drive up U.S. budget deficits to over one trillion dollars per year as far as the eye can see.  Trillion dollar deficits are nontrivial especially in an expanding economy where money becomes more dear.

Moreover, the size of the annual U.S. deficits will exceed all but 12 of the 190 country  GDPs monitored by the IMF.   Foreigners have been a large buyer of U.S. Treasuries over the past 20 years.  Let’s hope they continue to show up at the auctions. 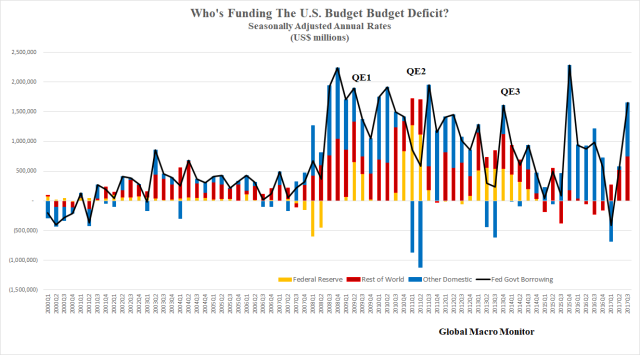 The End Of QE

Finally,  the Federal Reserve has stopped its indirect monetization of the U.S. budget deficit.  The table below shows that during the period of QE2 and QE3, from Q4 2010 to Q4 2014,  the Fed financed on average over 60 percent of the U.S. budget deficit.  Add foreign financing (mainly foreign central banks) and the deficit was over financed during the period, repressing and distorting interest rates across the yield curve and freeing up capital to flow into stocks and other risk assets.

Though the Federal Reserve still holds around 30 percent of the stock of outstanding Treasury securities,  their flow has turned negative as they are now running off their balance sheet.

Growing deficits coupled with declining flows from financiers who have been insensitive to market rates will certainly put a strain on interest rates in the U.S., and it unlikely to dissipate anytime soon.

No doubt, there will be periods of short covering bond rallies and bouts of flight to quality, which will drive stocks temporarily higher, but make no mistake,  “We are not in Kansas anymore.”

The U.S. government is going to have to work a bit harder and pay more to attract capital to finance itself.   “Crowding out” will increasingly become an issue.  Nevertheless, the  U.S. government will get funded and crumbs will be left for other markets.

We sense foreign buyers of Treasuries also sense this and have become a bit more tepid in their purchases and have on the margin been sellers of the dollar as the U.S. current account deteriorates    This is a change from prior periods where central banks would intervene in their foreign exchange markets and recycle almost all the excess dollars back into the U.S. bond market.  It could be they are also diversifying their stock of FX reserves.

It is also important to keep and eye on interest rates in the eurozone.  The monetary hawks are circling Mario Draghi.

It is baffling the German economy, which is probably growing at 4-5 percent in nominal terms, has a 10-year bond yield of .65 percent.  Granted the ‘zone is a two-speed economy with the North and South, but the rule of thumb is that long-term yields should be close to nominal GDP growth.

That puts the bund yield about 300-400 bps below its equilibrium value.  The European bond market is a disaster waiting to happen, in our opinion, and will certainly have a spillover effect in the U.S. bond and equity market.

The global economy is a complex adaptive system which nobody fully understands. We have laid out our analysis and there you have it, folks, our best guess without the cheerleading that every little sell-off is a BTFD opportunity.

Sometimes market hurricanes do occur and, though it’s not the end of the world, it is best to tread carefully and take shelter.  We take the recent volatility shock as a warning shot across the bow.

Even if all our facts are correct,  our conclusions may be completely wrong.

To illustrate this, we like to use the story that Abraham Lincoln used to tell to try and persuade juries when he was an Illinois circuit court lawyer.

“Pa, Pa, the hired man and sis are in the hay mow and she’s lifting up her skirt and he’s letting down his pants and they’re afixin’ to pee on the hay.” “Son, you got your facts absolutely right, but you’re drawing the wrong conclusion.”