We have had lots of requests to update our JFK-Trump S&P500 analog.  Here you go.

The Kennedy-Trump S&P500 analog is tracking, on a directional basis, relatively well, with the Trump S&P now 3.56 percent below the JFK S&P, 347 trading days after election day.  Not a surprise with today’s lightening speed market.    The Trump S&P is running about two weeks ahead of the JFK S&P.

We have also included below a daily and monthly roadmap if you buy into the analog.  By “buy in” we do not mean that the analog tracks on a daily basis — the main criticism of the doubters –  but the direction and time-space are relatively similar.   Both markets priced Goldilocks but ran into a short-term Frankenstein.

Note the downdrafts and the increase in volatility in April and May, with a bottom at the end of June, a rally into August, and the retest of the low in October, coinciding with a missile crisis.

We discovered this analog by crunching 70 years of data looking for similar volatility shocks to the one that hit the stock market in early February.  We found three:

We threw out Ike’s heart attack as it was not a prelude to a bear market.  The S&P500 recovered shortly after the sharp Monday sell-off after President Eisenhower had a heart attack on the 8th hole at Cherry Hills Country Club the prior Saturday afternoon.

Why The Analog Works

We believe this analog is working for the following reasons:

The most important, in our opinion,  is #2 – the percentage move and time frame.

Bear markets always follow bull markets and the bigger the prior move in a compressed time frame, the harder the fall.  Bear markets look for catalysts to sell, but the underlying vulnerability remains — valuation and longer-term overbought conditions.

We are also expecting a few flash crashes during the next few months.

We came across the following piece, a real nugget, by the great Jason Zweig, who wrote in his WSJ article,  Back To The Future: Lessons From The Forgotten ‘Flash Crash’ Of 1962,  in 2010:

…“The stock market careened downward yesterday,” reported The Wall Street Journal on May 29, 1962, “leaving traders shaken and exhausted.” The Dow Jones Industrial Average fell 5.7% that day, down 34.95, the second-largest point decline then on record.

…the “market break” of 1962 came after a run-up in the market that had led many investors into complacency. In 1961, stocks had risen 27%, with leading technology stocks like Texas Instruments and Polaroid trading at up to 115 times earnings.

Then, without warning, stocks “broke.”

…In this year’s crash, many trades, especially in exchange-traded funds, went off at prices wildly different from the orders investors had placed. Likewise, in 1962, “some orders were executed at prices substantially different from those which prevailed when the order was entered,” an investigative report by the Securities and Exchange Commission noted the following year.

Some high-frequency traders, which use powerful computers to make markets in stocks, stopped trading in this year’s flash crash at the very moments when the market needed liquidity most urgently.

In 1962, high-frequency trading didn’t exist, but “specialists” did. By law, specialists were obligated to try to maintain a fair and orderly market for each stock on the floor of the exchange. However, concluded the SEC’s report, “At no time during the day did the specialist intervene in sufficient volume to slow the rapid deterioration of the market in IBM.”

…Traumatized investors bombarded the White House with complaints  and pleas for help. And they voted with their feet, in what the SEC called a “general public disenchantment with the market.” As households slashed their purchases of stocks, 8% of stockbrokers left the business throughout 1962, and “the pinch was felt” even by giant firms like Merrill Lynch, whose net earnings fell by half from the year before.  – Jason Zweig, WSJ, May 29, 2010

During the next few months, our investment accounts will only be buying the French Dip.  That is Buy The F**king French Dip (BTFFD). 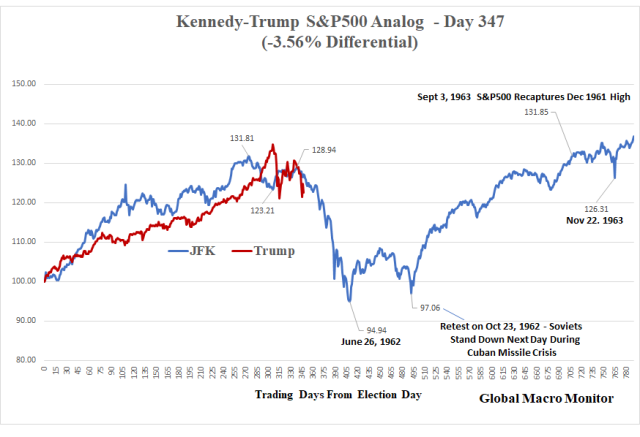