The S&P Levels You Need To Know

The futures were rejected right at key resistance in overnight trading, making a high at 2814.0 during in early morning pre-trading and it now down 31 handles in Asia trading.   The cash market was repelled today right at 2800 (2800.18 if you’re counting)

The cash S&P made another well-formed Doji candlestick today.  Notice during this Q4 correction, the Doji stick has signaled major reversals.   It is important the cash S&P closes above 2817 in the next few days in order to set the stage for the Christmas rally.

The S&P had rallied 6.43 percent from the Black Friday/Thanksgiving low below succumbing to profit taking today.  Calling short-term market moves is a mug’s game but we suspect they are gonna pull out all the stops to rally ‘em.  Follow the indicators on your panel as it’s foggy and there is some significant event risk.

Stocks For The Medium-Term

You know our medium-term view on the U.S. stock market, which is reflected in the following chart.

The chart is Warren Buffet’s favorite stock market valuation metric.  Just stare at it a few moments and try and internalize it, folks.  Then make your own inferences of what it means for future stock market returns.

If you read our Month In Review post last night, you would have noticed we are very skeptical of the fundamental factors which have driven the recent rocket ride in stocks.  The Powell cave was a disgrace, in our opinion.

Take a look at the following chart, which graphs the 64 months where the civilian unemployment rate has been under 4 percent over the past 70 years with the real effective Fed Funds rate (using monthly yoy CPI inflation) in that particular month.

Now. try and convince us, or anyone, for that matter,  the Fed Funds rate, which is currently negative in real terms,  is “just below the broad range of estimates of the level that would be neutral”  with an unemployment rate at less than 4 percent.   He blinked to the president’s bullying.

Then there is the China Trade Deal, supposedly cut in Buenos Aires.  “It’s an incredible deal. It goes down, certainly, if it happens, it goes down as one of the largest deals ever made.”  Note the “if” and a big if, to say the least.

Then this last night that got the S&P traders really, really lathered up.

China has agreed to reduce and remove tariffs on cars coming into China from the U.S. Currently the tariff is 40%.

But China’s readout of what happened in Argentina is different. China seems to believe that the only real movement was an agreement to halt additional tariffs and a mutual commitment to reduce the ones Trump and Xi put into effect this year.

In other words, Trump makes it sound like China is starting to cave to his demands. Top Chinese officials make it sound like the only thing that’s about to change is that U.S.-China trade relations would go back to where they were in January — before Trump unleashed his tariff war.  – Washington Post

The financial academics are going to have to develop a new theory and a “bullshit discount factor.”

Moreover, Mr. Mueller appears he is about to deliver to the White House his Christmas present.  Will it be a shiny new bicycle and clean political bill of health or a Russian lump of coal?  This will determine the mood of the tweets in the coming month, and,  we know,  tweets move markets in the short-run.

Have a look of this year’s Treasury auctions compared to last year. 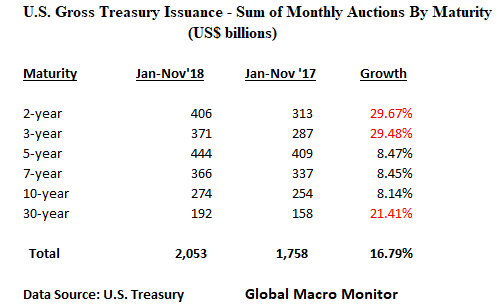 With 2 and 3-year Treasury issuance growing at 30 percent and the belly and the 10-year growing at less than 10 percent, it doesn’t take a genius to understand why the yield curve is behaving the way it is.  Are we wrong?

The Treasury seems to be running their own version of the Fed’s “Operation Twist.”

We think it was a mistake the Fed did not announce the unwind of Operation Twist, the manipulation of the yield curve pushing longer rates lower when it began to normalize interest rates and the balance sheet.   Now market participants fret over distorted meaningless signals of Christmas past, which could, through reflexivity, have a real impact on the real economy.

We will have more on this later.

17 Responses to The S&P Levels You Need To Know