Interesting piece in The Hill yesterday on Venezuela by former U.S. Senator Judd Gregg, Venezuela, the Monroe Doctrine and the Roosevelt Corollary.

A must read for those interested in all things Vennie.

He refers to the Roosevelt Corollary to the Monroe Doctrine, which originated in the Venezuela debt default before last, a subject of our recent post,  Venezuela, Debt, and Gunboat Diplomacy 2.0.

The Roosevelt Corollary of December 1904 stated that the United States would intervene as a last resort to ensure that other nations in the Western Hemisphere fulfilled their obligations to international creditors, and did not violate the rights of the United States or invite “foreign aggression to the detriment of the entire body of American nations.” As the corollary worked out in practice, the United States increasingly used military force to restore internal stability to nations in the region. Roosevelt declared that the United States might “exercise international police power in ‘flagrant cases of such wrongdoing or impotence.’” Over the long term the corollary had little to do with relations between the Western Hemisphere and Europe, but it did serve as justification for U.S. intervention in Cuba, Nicaragua, Haiti, and the Dominican Republic.  –  U.S. State Department

Recall in that piece we stated Venezuela busted sovereign bonds were tradeable but investable.  Now, after U.S. Treasury restrictions, the bonds are not even tradeable.

“It is a difficult call.”

Back to Judd Gregg.    It is hard to decipher what he is advocating and there is no mention of a foreign power, such as China or Russia, mingling in Venezuelan affairs which would definitely be an antecedent to invoke the Monroe Doctrine and Roosevelt Corollary for the use of force in Venezuela.

He also concludes other Latin American countries will not intervene and the U.S. will most likely have to go it alone if the Trump administration chooses military intervention.

The most interesting interpretation of the doctrine, however, came from President Theodore Roosevelt, who added what became known as the Roosevelt Corollary.

He essentially proclaimed that when there was flagrant or chaotic or despotic leadership of a Latin American country, the United States could intervene to re-establish the rule of law and democracy.

…Now we are confronted with Venezuela.

There can be no question but that Venezuela is being led by a tyrannical group of people.

…But it is fairly obvious that Maduro and his cadre are not departing. In fact, they appear to be doubling down on the oppression of the opposition.

…It could not be more apparent that if the Roosevelt Corollary is applied, the Maduro cabal qualifies for American intervention.

But is this a good course to pursue?

This is the issue that President Trump must decide. One suspects he is getting a variety of views from people such as national security advisor John Bolton and the Joint Chiefs of Staff.

Sounds like things are about to get hot in Caracas.  Then again, geopolitics are always hot with John Bolton at the helm of the NSC.

I miss pounding Polars in Caracas but my heart really aches for the Venezuelan people.  Let’s hope their pain is almost over and Ricardo Hausman, one of my intellectual heroes as a young economist in the World Bank’s Latin American department, gets the support he needs after regime change.  He and the Venezuelans will need lots. 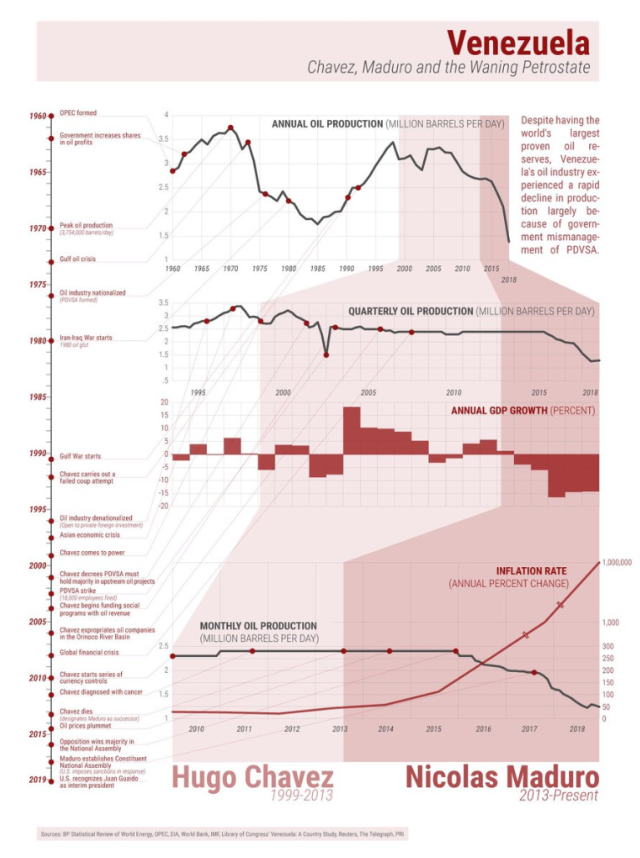