Don’t talk to me about snowflakes.  I have one daughter in college and one about to enter and we have had some very interesting and, let’s just say loud, discussions about free speech,  triggers, snowflakes, and safe spaces.   On one occasion, they became very upset that I took the position that the political shock-jock, Ann Coulter, who, by the way,  is antithetical to my own political views and I find repulsive, should be able to speak on the UC Berkeley campus.  In fact, I was ready to drive down to the campus and protest for her right to speak.

I tried to explain to my daughters if only popular ideas were protected, there would be no need for the First Amendment.  If you do not defend the free speech rights of the unpopular, even if their views are repulsive to you,  our liberty will never be secure.  My experience is that many university students have trouble grasping this concept.  It is not to say they don’t have the right to not invite someone to speak but to block a speaker, which one group has invited?  Come on, man!

Ironically, when I mentioned to the youngest how much we paid in taxes during the bountiful years, she was outraged.  Maybe today’s high schoolers are sensible fiscal conservatives?

Moving on, Charlie B. throws together a nice chart and also notes,

The REAL Fed Funds Rate (Fed Funds minus inflation) stands at 0.4%, which, if the Fed is done hiking (market saying 100% probability of a cut next month),  would be the lowest terminal rate of any expansion ever. Monetary policy remains extraordinarily easy. –  Charlie Bilello

Now, do you still wonder why gold is having a Ralph Kramden moment?  “One of these days, you’re going to the moon, Alice!”

Q: How robust is an economy or stock market that freaks out over a barely positive real Fed Funds rate, is triggered if the word “patient” is not removed from an FOMC statement, and considers a less than super-dovish Fed as a microaggression?

A:  A “snowflake” economy and market.

The market thought it had found its safe space with the dovish Fed and three rate cuts baked in.  We seriously doubt it and are prepared for a macroagression.

Coming Up Next:  The Trump Economy Scorecard

We have been very busy working on data to provide you with a full and comprehensive scorecard of the Trump economy as the presidential campaign gets underway and the B.S. starts to fly in earnest, on both sides.   It should be out in the next few days so watch for it.

Here is a little appetizer.

Because the current POTUS is always comparing his economy with that of his predecessors, we juxtapose several economic indicators during his first 2 1/2 years in office to the same timeframe as President Obama’s last few years in office.   President Trump essentially inherited an economy on autopilot and goosed it with tax cuts and some deregulation.

The chart below illustrates that economic growth in the first 9 quarters of President Trump economy was 1.9 percent (0.8 percent annualized) higher than the last 9 quarters under President Obama.  Net exports were the main positive contribution to the differential, which makes sense as the trade-weighted value of the dollar increased by over 20 percent during the Obama timeframe and declined 1.2 percent under President Trump, which also includes a 10 percent decline in his first year in office.    By the way, not one peep from the Obama administration about the Fed as the strong dollar created a more than massive economic headwind during their last few years in office.

Private fixed investment, mainly in nonresidential structures and equipment, was the second largest contributor to the growth differential, though residential investment has significnatly lagged under Trump. 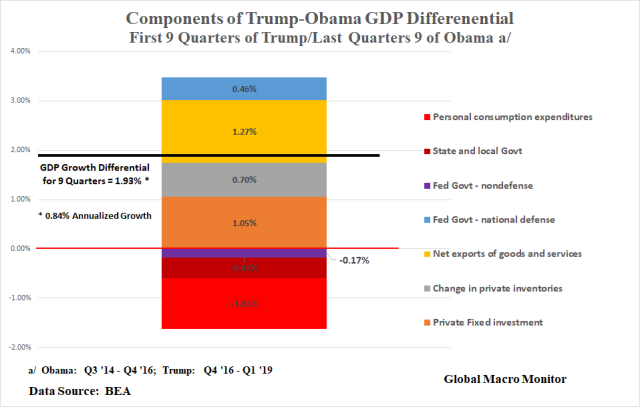 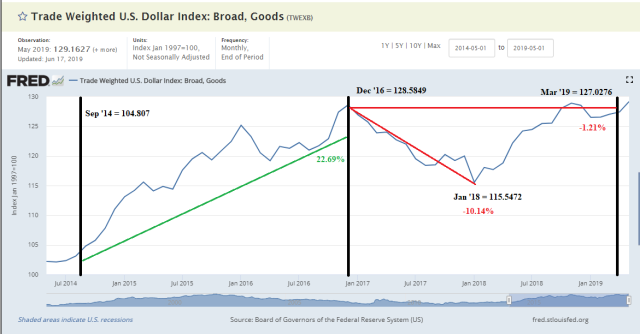 Though nominal wages have grown faster during the Trump economy, inflation has almost doubled, resulting in lower real wage growth than in Obama’s last several months in office, which is also consistent with lagging real growth of personal consumption expenditures.  The Phillips Curve does liveth.

14 Responses to The Snowflake Economy & Market