Now, Which POTUS Inherited A Mess?

President Trump likes to repeat the fictitious notion he inherited an economic mess but his hair is on fire over Obama’s factually based tweet this morning.

Eleven years ago today, near the bottom of the worst recession in generations, I signed the Recovery Act, paving the way for more than a decade of economic growth and the longest streak of job creation in American history. pic.twitter.com/BmdXrxUAUf

Did you hear the latest con job? President Obama is now trying to take credit for the Economic Boom taking place under the Trump Administration. He had the WEAKEST recovery since the Great Depression, despite Zero Fed Rate & MASSIVE quantitative easing. NOW, best jobs numbers….

Here Are The Facts 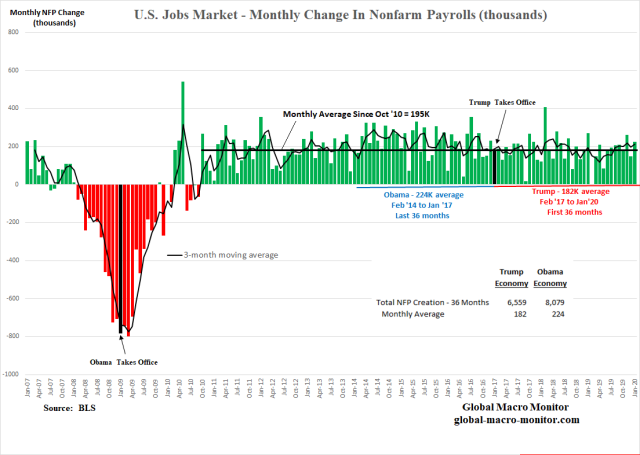 Under Trump, jobs have increased by 6.6 million versus 8.1 million in Obama’s last three years.  The average nominal wage is higher but the average real wage is lower.

…a stronger/weaker currency has a tightening/easing effect on economic conditions.  – Economist

The Euro is dropping against the Dollar “like crazy,” giving them a big export and manufacturing advantage…and the Fed does NOTHING! Our Dollar is now the strongest in history. Sounds good, doesn’t it? Except to those (manufacturers) that make product for sale outside the U.S.

Finally, the Chicago Fed’s National Financial Conditions Index illustrates the Trump economy is experiencing some of the loosest financial conditions since the early 1990s.

Now, who is conning who, folks?

If you’re in the con game and you don’t know who the mark is … you’re the mark. — David Mamet

This entry was posted in Uncategorized and tagged Obama, Relative economic performance, Trump. Bookmark the permalink.