Apple reports after the bell on Monday and we think this event will determine the direction of the risk markets over the next few weeks.  Given its recent and historic run-up into earnings, the company will have to beat estimates by a very large margin for momentum in the stock and in the overall market to continue, in our opinion. 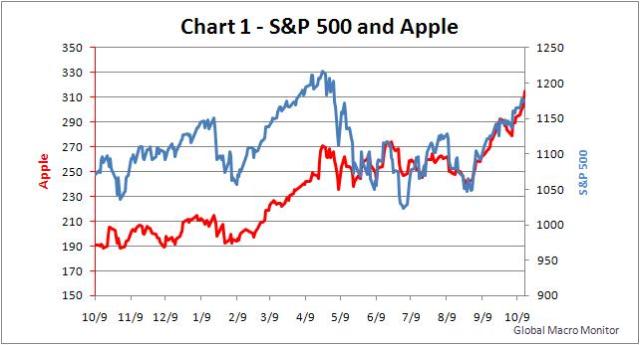 New Economy Leader
Not only is Apple 20% of the NASDAQ, it is the leader and symbol of the New Global Economy.   Consumers all over the world seem willing to do whatever it takes to own Apple products.  The transformative potential and innovation of Apple may be Obama’s Black Swan as the Internet was for the Clinton Administration.  Imagine a medical diagnostics app for the IPad that someday replaces routine visits to the doctor office.  We have no doubt this is where we’re headed. 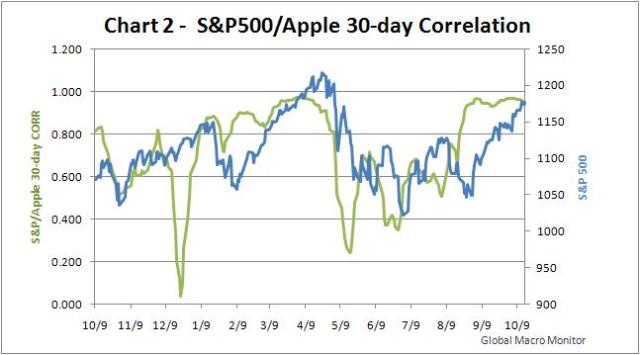 Apple is THE Market Leader
Apple’s stock has exhibited strong leadership since the March’09 bottom.   After constructing Chart 2, we were amazed to see how Apple and S&P500 have generally decoupled during broad market sell-offs and recouple during market rallies.  Rarely does correlation track the performance of a price series so well.  This is confirmation of Apple’s strong  leadership and relative strength. 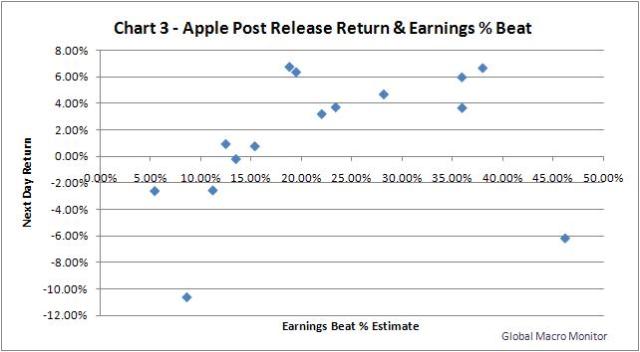 Historic Run-up into Earnings
Similar to the overall market, the stock is very hot going into earnings and will need a big beat for the momentum to continue.   Apple is up 9 days in a row, which has happened only three times in the past ten years, and has rallied more than 11 percent in the past 10 days.  Chart 4 shows the post release next day return on Apple given its 10-day return prior to an earnings announcement.  The data covers 15 releases from Jan 2007- Jul 2010.

Excluding the noisy data points during the market crash,  there is a clear negative correlation of how the stock reacts to earnings and its run-up prior to the release.  Note there are only two points where Apple was up 11-12 percent into earnings – January 2007 when it sold off 6 percent after a 46.15% beat, and July 2009 when it traded up .76%. after beating estimates by 15.38%. 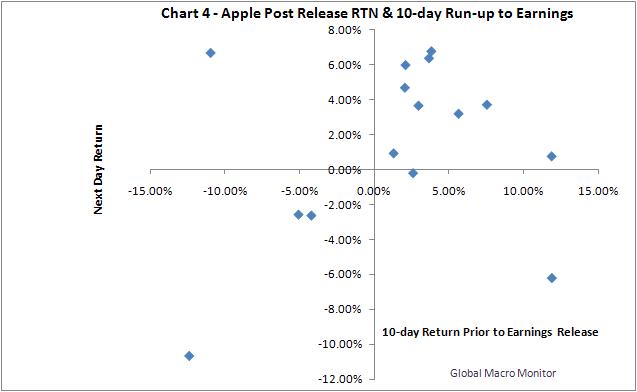 Seasonality
Chart 3 is interesting as it illustrates the relationship of the stock’s reaction to the earnings beat.  Not surprising, there is clear strong relationship to how the stock reacts to earnings beats.  The outliers reflect seasonality as three of the four data points with negative returns are associated with a January earnings release.

Needs 30% Beat
Based on history and given the recent run-up of the stock,  Apple is going to have blow away the estimates and probably needs to hit a number of $5.20 or above to keep the momentum going.  We wouldn’t be surprised, but are not willing to make a big bet on it, or against it, for that matter.  We have no doubt IPad sales will blow away estimates, but we’re focused on margins.  It will be interesting to hear what management has to say about labor and materials costs on the conference call as we know their suppliers have been dealing with these issues.  In addition, during the July conference call,  management stated the IPhone4 has a higher cost structure.

Our baseline scenario is the good news is sold, which causes a small correction in the overall market and some consolidation in risk assets.

Apple, in our opinion,  is representative of the overall market,  which has run-up in anticipation of QE2.   We love Todd Harrison’s observation,

The net takeaway is more of the same: the specter and promise of QE2. I’ll say this, given the widespread global anticipation of this program, this Wizard of Oz better be a Big Mama when the curtain is finally flung to the side. A chunk of this perceived stimuli is already baked into the tape. The question is whether the “sell the news” crowd will openly ask “what’s next?” once it’s unveiled.

This entry was posted in Equities and tagged Apple, Earnings, News, S&P500. Bookmark the permalink.