Excellent CNBC interview with David Stockman, President Reagan’s head of OMB, who speaks his mind and never holds back.    Some dismiss him as a perma-bear and doomsayer.

We certainly don’t, just has been a bit early, like every analyst and economist worth their salt.  His analysis and model are sound.

By the way, if you ever meet someone who claims they always top tick or buy every bottom,  and have perfect timing, run as fast as you can.

Moreover, the former “beltway boy wonder” doesn’t have to make his money trading and can maintain his conviction without going bankrupt or losing his career.   He will eventually be right.   It’s all timing, my friends.

Listening to him today, we respect him even more for his intellectual honesty.   We have always perceived Mr. Stockman as a supporter of the president, but we could be wrong.

He never allows his politics to warp his analysis.  Rare and refreshing.

He was famously “taken to the woodshed” by President Reagan for his statements in a 1981 Atlantic Monthly article, that “supply-side economics — the backbone of the Reagan economic revolution – was a ‘Trojan horse’ that would ultimately benefit the rich.”

He laid it all out there today and held nothing back.

*the interview was concluded before the announcement of a 10 percent on an additional $200 billion of Chinese imports was published by the USTR after the market close.

No Reagan Moment On Free Trade

Sorry,  Mohamed,  we love you but there will be no “Reagan Moment” for International Trade.  We hope we are wrong, and we could be, but we don’t think so.

Trump is no Reagan, the ultimate free-trader.   Larry Kudlow and Stephen Moore now talking tariffs?    This is not an administration looking to further trade, in our opinion, but one only to protect and coddle its political base.

Trump’s triggers his base with words such as “free trade,” among others,  and blames much of their problems on the “bad trade deals” of previous administrations.   It works for him.  Why fix it?

But those who, like me, thought Trump’s bark would be worse than his bite on trade are having second thoughts about where all of this might lead.  – Dani Rodrik

President Xi Won’t Back Down

Moreover,  how in the world can President Xi, after consolidating power for life as the country’s ultimate strongman now back down and look weak to the Chinese people?   China has secured the high ground of multilateralism.  Even if it’s bullshit or not.   Furthermore,  the U.S. appears to be growing exponentially more isolated.

As we posted on Friday,  we are now in a nonlinear trajectory.  Things can unravel fast, or be put right quickly.   Maybe the Senate?   Nobody knows where this will end up.

We have all learned over the past 18 months that the president is capable of doing a 180, even in mid-sentence, and convince himself he held the position all along.  That unpredictability makes it a risky trade.

Markets In The Land Of Pharaoh

It does feel the markets are in Egypt, however.  The land of de Nile.

The post-war international order is more at risk of unraveling – and we are not saying its demise is imminent – than is currently priced. 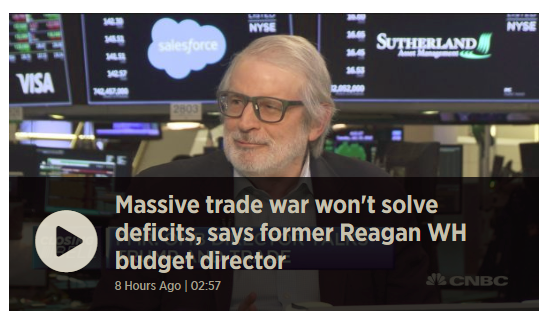 34 Responses to Reagan’s “Boy Wonder” Nails It On Trade